US Involvement in Yemen's Civilian Carnage 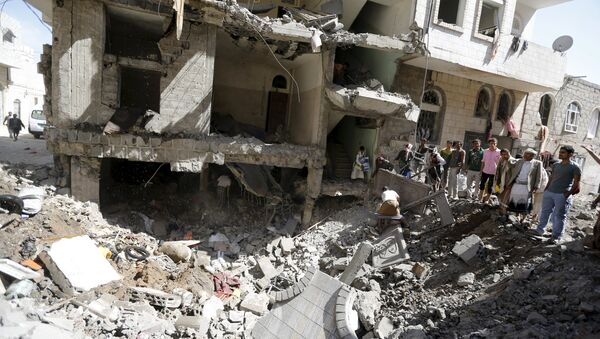 Civilian deaths in Yemen have become a tragic routine since hostilities began in late March. According to UN data, the majority were killed by Saudi-led airstrikes that are supposed to be targeting Houthi rebels and their allies.

The UN estimates that in the half-year of bombing, there have been roughly 2,355 civilian deaths. Many of these are reminiscent of the September 28 drone strike on a wedding party which left dozens dead.

Houthis to Release Prisoners If All Parties to Yemeni Conflict Do Same
Speaking to Vice News, witnesses recalled a scene of joy turning into one of horror.

"Once we reached the site of the airstrike, all we could find were body parts," said a woman whose daughter was killed at the celebration.

Human rights monitors and the UN have condemned the civilian casualties which have stemmed from the Saudi-led campaign in Yemen, a campaign strongly supported by the US government. Since October 2010, the US has sold Saudi Arabia more than $90 billion in equipment and weaponry. Since hostilities broke out in March, the US has also provided the coalition with vital air-refueling sorties, search-and-rescue support, logistics and intelligence.

"The Saudi-led coalition is equipped with state-of-the-art weapons and targeting technology, yet airstrikes have caused a tremendous number of civilian casualties," Claire Talon, Middle East and North Africa director at the International Federation for Human Rights, told Vice.

"It is clear that states providing intelligence and assistance to the coalition, including the US, may be accused of complicity in war crimes."

While questions have been raised about Washington's potential involvement in war crimes in Yemen, proving those allegations becomes difficult.

From the start, the US government has distanced itself from the slaughter by continuously insisting that it is "deeply concerned" about the casualties, while at the same time emphasizing that it's not responsible for targeting decisions.

"There is a clear distinction between logistical and intelligence support, which we have provided, and taking part in targeting decisions, which we do not," a senior White House official, speaking on condition of anonymity, told Vice. "We have provided logistical and intelligence support in part to facilitate accurate and precise coalition operations in an effort to minimize civilian casualties."

Al-Qaeda Allegedly Downs UAE Drone in Yemen - Source
When requesting clarification on the extent of US involvement in Yemen, Vice received similarly dodgy responses from the White House, Pentagon and CENTCOM. No one would say, precisely, what information the US provided to the Saudis in order to avoid casualties, and officials stressed that the Kingdom of Saudi Arabia is ultimately responsible for final targeting decisions.

But experts say that even if the US is not officially a member of the Saudi-led coalition, and the American assistance program is "primarily an advisory one," the coalition would have immense difficulty operating — politically and military — without it.

"It seems now that there is a tendency within coalition operations to not acknowledge which countries in the coalition are taking what action. Coalition operations are providing an effective way to deflect media inquiries and concerns about civilian casualties," Chris Jenks, a professor of international law at Southern Methodist University, told Vice.

The US has also failed to encourage the kind of transparency which could provide accountability for civilian deaths.

"One way to have settled who provided the targeting for the catastrophic attack on the wedding would have been an international inquiry, but sadly the US did not lift a finger to make that happen," Sarah Leah Whitson, Middle East and North Africa director at Human Rights Watch, told Vice.