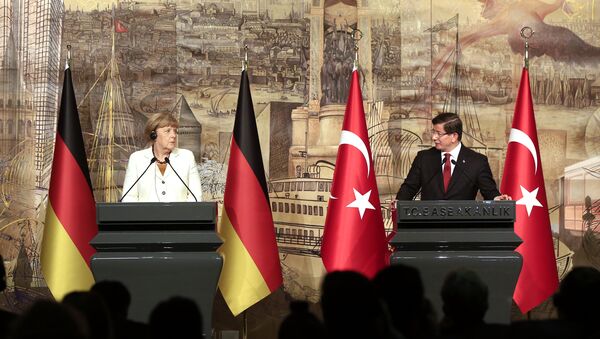 EU leaders have agreed to give US$3.4 billion in aid to the Turkish government and have promised to lift visa restrictions for people traveling to the European Schengen zone in return for containing the refugee crisis and helping tackle people smuggling.

Turkey Hopes to Be in 'EU Family Photo' Soon
The pledge has been seen as a boost for Turkey's chances to join the European Union and a U-turn by the German government, which alongside France, has opposed Turkey's membership of the group over its human rights record.

Following up on the deal, German chancellor Angela Merkel paid a visit to Ankara, during which she told a press conference:

"Germany is ready this year to open chapter 17 [Economic and Monetary Policy] and to make preparations for 23 and 24.

"We can talk about the details," she said.

In return, Turkey would increase security and provide humanitarian assistance to refugees to persuade them to stay in the country.

Turkish Prime Minister Ahmet Davutoglu said he hoped Turkey "to be in the family photo of the EU one day," having told Turkish broadcaster TGRT Haber days before the meeting that:

"…we [Turkey] will absolutely not sign any agreements if no steps are taken regarding the Schengen and if Turkish citizens are not granted the right to travel to Europe without a visa."

Turkey has been chasing membership since the 1950s with some Turkish politicians hoping to join in 2023. However, Merkel's attempt to use the refugee crisis as leverage for Turkey's accession to the European Union on a quid-pro-quo basis has been criticized by some European politicians. 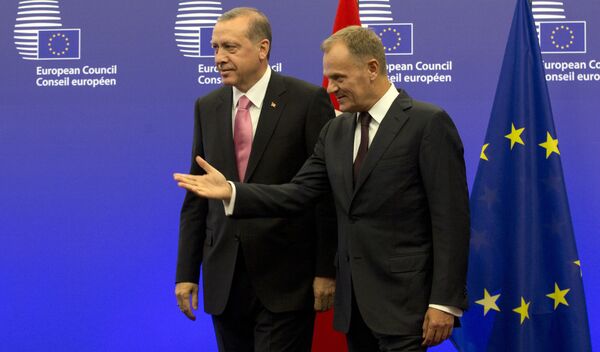 "Erdogan… can now say I have everyone in my pocket, everyone's dancing to my tune."

German government officials, however, say talks are essential if Germany is to get a handle on the refugee crisis in the European Union. Turkey is the main source of the 700,000 people who have entered the EU so far this year.

why the EU should rethink its support for Erdogan @BilginAyata and Esra Ozyurek http://t.co/xOkDtawvop

In a joint blog, written by Dr Esra Ozyurek, Associate Professor in Contemporary Turkish Studies at LSE and Dr Bilgin Ayata, Professor of Political Sociology at the University of Basel, the academics suggest that the recent bombing of a peace rally in Ankara which killed over 100 people represents "the low point of this increasing escalation, which the EU has decided to simply ignore in exchange for cooperation for refugee containment.

"It is time the EU draws its own lessons from the Arab uprisings: preaching democratization while supporting non-democratic leaders is not just hypocritical but has lasting consequences, as the arrival of refugees in Europe reminds us on a daily basis."

The trip to Ankara by Angela Merkel comes just two weeks before the Turkish general election and has been criticized for boosting President Erdogan's popularity and support for his ruling Justice and Development Party (AKP).