Big Ben May be Silenced for 4 Months During $60Mln Repairs 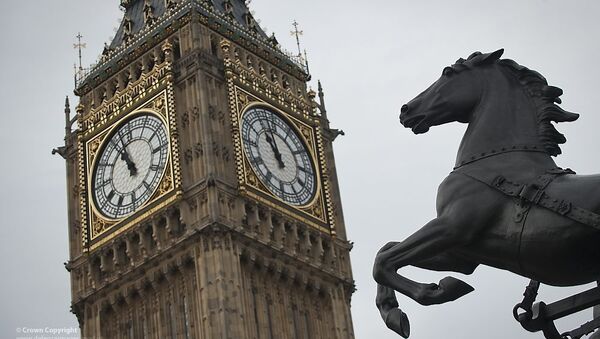 The UK Parliament’s Great Clock needs urgent restoration work with the total cost of up to $60 million, which would also stop Big Ben for the longest period in its history, according to a report.

Feel the Love: Clothes That Show Who Likes You (VIDEO)
MOSCOW (Sputnik) — To prevent the famous clock from failing the UK government has to provide some $7.5 million, which could see the cost rise to over $60 million, if Big Ben’s other problems are not addressed during repairing, the Finance and Services Committee of the UK Parliament said.

"There are major concerns that if this is not carried out within the next two to three years, the clock mechanism is at risk of failure with the huge risk of international reputational damage for Parliament," the report said, as quoted by The Sunday Times.

Big Ben suffers from "chronic problems" with the bearings behind the hands and pendulum, as well as severe metal erosion, cracks in the roof and other structural defects, the report said.