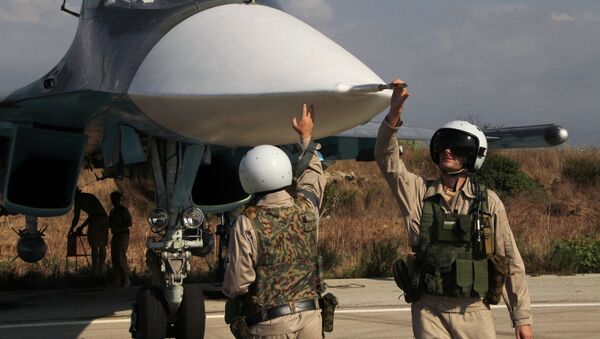 © Sputnik / Dmitriy Vinogradov
/
Go to the photo bank
Subscribe
Russian warplanes in Syria have destroyed a total of 456 ISIL targets since the operation began on September 30, the Russian General Staff said Friday.

Russian Navy Can Attack ISIL Positions in Syria at Any Moment
Russian warplanes in Syria have destroyed a total of 456 ISIL targets since the operation began on September 30, the Russian General Staff said Friday.

Over the past week, they have carried out 394 sorties, destroying 46 command and communication posts, 6 explosives manufacturing facilities, 22 warehouses and fuel depots, along with 272 militant positions, strongpoints and field camps, Colonel-General Andrei Kartapolov, head of the Main Operations Directorate of the Russian General Staff, told journalists during a briefing.

"Most armed formations are demoralized. There is growing discontent with field commanders, and there is evidence of disobedience. Desertion is becoming widespread," Kartapolov told reporters.

#Kartapolov: within a week, situation in #SYRIA has considerably changed resulting from airstrikes on #ISIS objects

“I would like to point out once again, our aircraft carry out strikes against the militants infrastructure based on data provided through several intelligence channels as well as intel supplied by the information center in Baghdad,” Kartapolov said, referring to accusations that Russian warplanes had hit targets other than ISIL.

“We only attack targets held by internationally-recognized terrorist groups. Our warplanes do not operate in the southern regions of Syria where, according to our intel, units of the Free Syrian Army operate,” Kartapolov said.

Kartapolov said some of the airstrikes carried out by the US-coalition target civil facilities.

“It is against our principles to advise our colleagues which targets to strike. However, on October 11 a power plant and an electrical substation were destroyed by coalition warplanes in the vicinity of Tell-Alam,” he told foreign military attaches and journalists attending the briefing.

“It looks like someone is deliberately destroying the civilian infrastructure in population centers making them unfit for habitation. Because of that civilians are fleeing these towns and contribute to the flow of refugees to Europe,” Kartapolov noted.

At the same time, he stressed that Russia had repeatedly asked coalition members to share intelligence on ISIL positions, but none of these requests were met.

“When we didn’t receive the ISIL forces coordinates, we requested our partners to provide us data about regions held by moderate opposition. Unfortunately, our partners didn’t provide a coherent answer to any of our questions,” Kartapolov said.

“So we went ahead and created a comprehensive map of areas controlled by ISIL, based on our intel and on data provided by the information center in Baghdad,” he went on to say.

He added that Russia and US are about to sign an agreement to provide for the safety of their aircraft over Syria. "All the technicalities have been agreed on. Russian and US lawyers are checking the text which we hope will be signed soon," Kartapolov said.

Moreover, Russia has already established a direct link with Turkey "to ensure safety of flights near the Turkish border and prevent midair incidents", and a hotline between the air force control center at the Hmeymin base and the Israeli Air Force, he added.

000000
Popular comments
Let´s see how the primitive Turkish retard, Erdogan, plan to deal with standing, impatient armies of his mercenarie wahhabi freaks, without being able to sent them to Syria. Yeah, good luck with that. Im going to love the next picture of him dangling from a lamp post... T