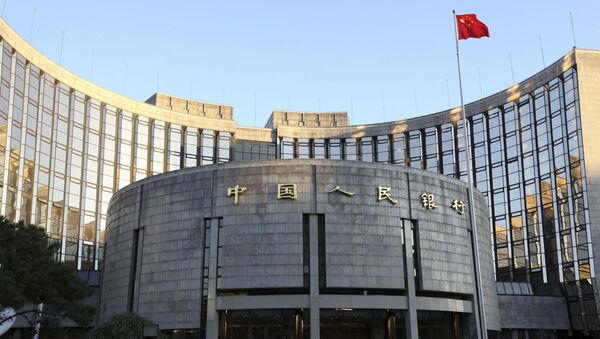 As China deregulates its financial services and proceeds with structural reform, broader economic activity has experienced a timid revival, hinting at a possible mid-term resurgence after years of gradual cooling and more recent turmoil in the country's domestic markets.

Kristian Rouz — New loans issued in the People's Republic of China significantly surpassed estimates in September as the People's Bank of China's (PBOC) monetary stimulus started to take effect, possibly hinting at a stabilization of broader economic growth. However, the estimated pace of economic expansion for 2015 and the following year remain moderately low, still undershooting Beijing's target of 7% annually and the demography-motivated threshold of 8%, stirring debates over whether further monetary easing could be put into play in the near future. China's financial markets welcome the developments, as larger volumes of affordable liquidity create moneymaking opportunities, while also supporting modest optimism in commodity markets.

China's Middle Class Overtakes US as World's Largest
China's aggregate financing (a wider measure of all new loans issued) rose to 1.3 trln renminbi ($205 bln) in September from some 1.08 trln renminbi in August, and above previous projections of 1.2 trln renminbi, according to a PBoC report. The regulator directly outlined that the increase in lending is attributable to a rise in the central government's infrastructure spending and monetary stimulus measures. Since November, the PBoC has cut interest rates five times, thus allowing more money liquidity into the domestic market.

Currently, market participants expect another 0.25% rate cut by the year's end, along with a 0.5% cut in commercial banks' reserve requirement ratios (RRR), providing a further push to China's economic expansion, while exposing the nation's financial system to more risk and potentially exposing it to more turbulence and instability.

The expansion of credit provided relief to the markets for now, with the Shanghai Composite hitting an eight-week high even though yesterday's inflation data were a disappointment, suggesting a further cooling in the celestial kingdom's economy. The financial turmoil in July and August, coupled with lackluster data were a concern, but now the broader situation might be improving due to overall economic deregulation, financial liberalization and cautious structural reforms as China takes cautious steps towards fully integrating itself into the global financial market.

New renminbi-denominated loans (a measure linked with domestic demand and offshore renminbi trading) rose to 1.05 trln renminbi compared with previous estimates of 900 mln renminbi. As an after-effect of the PBoC stimulus effort, the M2 money supply rose by 13.1% year-on-year, partially explaining the recent renminbi FX rate volatility. The Chinese national currency, however, has by far regained all of its losses posted in August.

The monetary conditions index has been rebounding since July, providing clues to a future expansion in financial services. It is yet unclear, however, whether the improving conditions will spur the non-financial sector.

Currently, the PBoC's base interest rate stands at 4.6%, while banks must hold at least 18% of their capital as cash reserves. Further cuts in both measures are necessary, however — China's growth is still slowing.

Will China Dumping US Bonds Undermine Global Finance?
China's economy is expected to expand only 6.8% this year: its slowest pace in 25 years. The expansion in domestic credit is a good sign — China is indeed moving towards a more sustainable economic model driven by domestic demand. Given such circumstances, the negative impact of the Chinese slowdown on commodity markets will gradually decrease as longer-term sustainability improves the demand-side expectations.

The Chinese economy is consensus-expected to grow 6.5% in 2016. If gradual progress is made in structural reform, this might turn out to be sufficient to support the nation's current socioeconomic well-being. The PBoC's monetary stimulus is poised to expand as the economy cools, while weaker inflation will allow for more stimulus measures, eventually encouraging financial markets as well as broader economic activity.