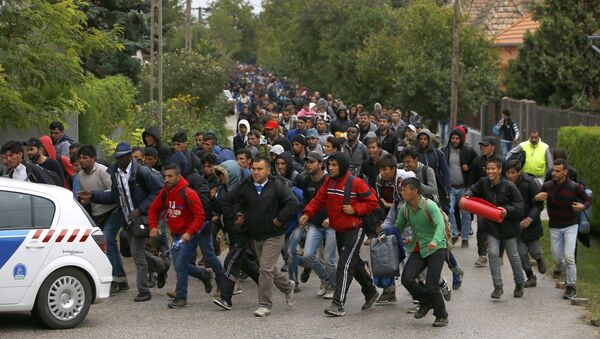 A plain desire to get much in exchange for nothing is the true reason why migrants are going to all lengths to get a foothold in the Western Europe, argues Andras, a Hungarian horse breeder who runs a huge farm with his wife and one employee, rising with the sun and burning the midnight oil – a man who knows firsthand what hard work really means.

Economic Migrants Are Posing as Syrian Refugees to Enter Europe
Vasily Raksha — Andras questioned the veracity of migrants’ image as “pitiable homeless asylum seekers having nowhere else to go”, as they are dominantly shown on the TV-screen.

According to Andras, their real impetus is a desire to receive economic benefits from wealthy EU countries, but the guests’ conduct is outrageously disrespectful.

“On the border we didn’t see that helpless poor people. They were a big group, they were arrogant and aggressive and wanted to have what they thought they need. They want to go to Germany or Sweden and have money from the state.”

When the migrants suppose that their wishes are not welcome, they react in an unfriendly way, he explained. As an instance the farmer cited an incident when a crowd of migrants sealed a vital highway, which exerted pressure on the national economy.

What is Really Driving Migrants to Europe and What Risk Do They Pose?
“Some 800 people stopped a motor way from Budapest to Vienna, and a very important part of the country was stopped, was blocked because of them.”

So is the Syrian war a sufficient reason for refugees to travel as far as Europe? The farmer disagreed and said that the conflict is often used just as a pretext, “as a good excuse” by the people who “are not that helpless and sometimes aggressive”.

“Those who are real refugees are still around Syria, they are in Turkey, Lebanon – close to their land because if they’re really waiting for peace and good life at home, then they stay and when it comes, they go home. But those who come to the Western Europe do not want to go home – if there is peace or war or anything. They just want to stay here and lead a better and easier life.”

Andras added that the overall situation is very complicated because “they don’t want to stay in Hungary” and are moving to Germany, Great Britain and Sweden, but Budapest has to fulfil its EU commitments, registering the migrants and letting them pass, as “we are all in the same boat.”

EU Migrant Crisis: Germany's Spiegel Asks 'How Naïve Do We Want to Be?'
Answering a question on whether the migrant influx made life more dangerous, the man said that he had not seen much change but shared that

Germans had started complaining about the deteriorating security situation.

“In those small villages and towns they lived very quietly, they didn’t want to close their doors, they could leave their cars outside with a key in the car, nothing closed. They are very unhappy now because their life has changed completely. They said they want back their quiet old life.”