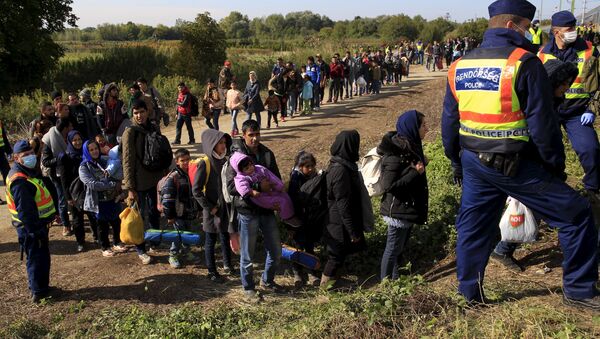 © REUTERS / Bernadett Szabo
Subscribe
Ilona, a hotel owner in the town of Bicske, where one of refugee camps in Hungary is located, shared her personal worries concerning the migrant issue and explained to Sputnik why European civilization is in danger.

EU Migrant Crisis: Germany's Spiegel Asks 'How Naïve Do We Want to Be?'
Vasily Raksha — Ilona voiced her approval of the international attempts to help forlorn asylum seekers from war-torn countries, as “it is naturally true and everyone has to help people in those situations.”

However, as a resident of Hungary, which serves as a gate for thousands of migrants rushing in to the EU's Schengen border-free area, Ilona advised against accepting the situation at its face value. The personal experience she gained from observing the developments near the camp differs profoundly from the image of migrants that the global mass media presents as rock-solid truth.

“The immigrants that I saw, most of them, 90 percent were young people, no women, no children, no elder people, only young men in their twenties – well-dressed, equipped with money, queuing up in front of the exchange office, buying laptops and telephones.”

In Ilona’s opinion, the Syrian conflict became a reason for speculation. The term “Syrian refugee”, that arouses sympathy and compassion, is used by stowaways trying to sneak into Europe and exploit its developed system of social support.

“Out of those people, only one third were from Syria.”

She cast doubts on the motives of people who decide to embark on long and dangerous journeys to culturally and religiously alien Europe instead of staying in countries with a more similar culture and background such as Turkey and Lebanon.

“If there is a war and you have to leave your country, I don’t think you should run thousands of miles on foot with your pregnant wife and children, for me it’s not natural.”

Ilona explained that the real driving force behind the new great transmigration in most cases is the chase after economic benefits.

Half of Czech Citizens Oppose Taking in Refugees
"In my understanding, the main reason that motivates the big amount of people [to go to Europe] is to have a better life for free. At the end of that journey they are going to get money for free. Having better life and in exchange doing nothing.”

What shocked her most was the behavior of migrants during an accident on September 3, when migrants stopped a train in Bicske demanding to be taken on to Vienna instead of staying in the local refugee camp.

“These people were under the train and the train was stopped. The migrants were very angry, people went there giving them water and food as it was still summer and it was hot. Everybody thought they [migrants] would need water. But you could see on the news that they threw away the water, they kicked the food down from the train – is it the behavior of somebody who is running away from big danger and wants to save his life? No, I don’t think so.”

Such conduct cannot be a feature of those who are willing to integrate into a new community, Ilona argued.

“If one is homeless, if he needs help, he behaves differently. He arrives, he follows the rules, he is happy to be offered what he is offered and he tries to adjust himself or herself to the situation. And this is not what we see.”

However, despite such a devastating experience, Hungary should not reject its EU obligations despite having “a big burden”.

“We have to bear that responsibility. This is our job because we are a part of Europe.”

The resolution of the Syrian conflict and similar crises will hardly stem the influx, as the political situation in migrants’ home countries is not the true reason behind their relocation, the hotel owner said.

“Their motivation is not to live in their country safely, but go to Finland or Sweden and have the highest potentially available social benefit in the world.”

The incomers do not want to follow the rules and customs of the countries where they arrive, which poses a threat to the European way of life, Ilona said, citing young Muslim mens’ negative attitude toward European girls wearing 'inappropriate' clothes.