Avoiding Crisis: US Aircraft Ordered to Make Way for Russian Jets in Syria 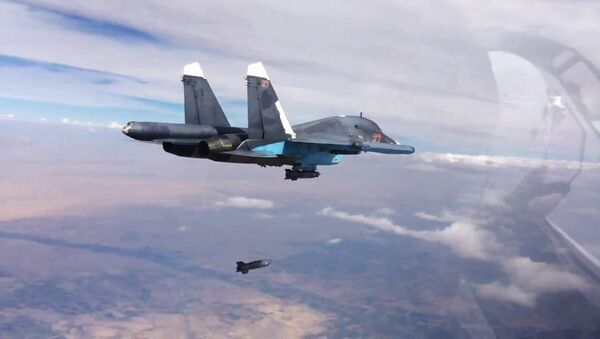 In the wake of US-Russian discussions on preventing accidental collisions between each others' aircraft while operating in the sky over Syria, the American side issued a special rule, prohibiting US jets from closely approaching Russian planes.

UK Military Attache to Clarify Alleged Permission to Down Russian Planes
Defense representatives of both nations conducted a video conference on safe flight operations over Syria on Saturday, CNN reported.

During the negotiations, they discussed ways of avoiding any possible incidents between Russian and American air forces during air raids in the sky over Syria.

The US has implemented a decree that forbids American pilots from getting any nearer than 32.2 kilometers (20 miles) to Russian jets while flying over Syria. Moreover, if Russian aircraft is detected in the area of US military operation, any American forces are obliged to cancel their operations in the area. Several US air raids have already been cancelled under that rule.

According to CNN, the US is concerned about the possible scenario in which a pilot would be forced to eject over Syrian territory, and situations like this are unacceptable for Russia as well.

Pentagon representatives said that the hour-and-a-half meeting was “productive,” and Russian media sources reported a Russo-American agreement on the issue. So far that document hasn’t been revealed publicly.

Syrian Chessboard: How Putin Will Win Out Over US Grandmasters
These negotiations are not the first instance of such meetings. Talks between Russians and Americans to guarantee the safety of their respective flight operations over Syria have been carried out for the last two weeks.

Both sides have now moved on to discussions about preventing approaches into Turkish airspace, considered to be an important issue for the US, but also for its NATO allies.

During the recent series of Russian air raids against ISIL, militants suffered significant losses, according to CNN.  The Russian defense ministry claimed that Russian military struck at least 55 ISIL targets, destroying the most crucial logistics centers of militants.