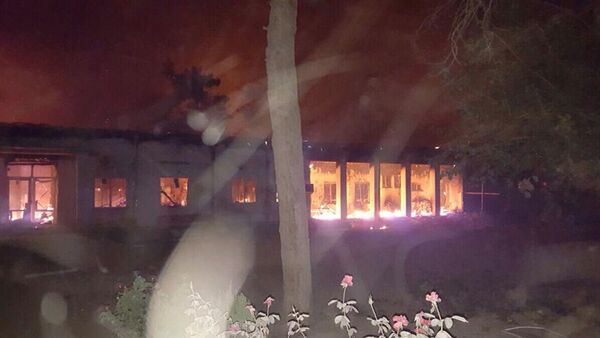 The US bombing of the Kunduz Doctors Without Borders Hospital is not the first US or NATO airstrike to result in massive civilian casualties, it is only one incident in a long series of mistakes that have been made by the US in Afghanistan.

The hospital bombing is not even the first major murder of civilians in Kunduz. In 2010, US jets called in by a German force killed 150 civilians who were siphoning fuel from trucks which had been hijacked by the Taliban but were stuck in a river. It does, however, raise questions about the role of the US in Afghanistan and the steps it took to enable the crises the country faces today.

During the Soviet war in Afghanistan, the US sponsored the training and arming of Islamist mujahideen militants to fight against Soviet and government forces. However, just as with the US aid for Syrian rebels today, it did not quickly appear that the people being trained would not only be driven to fight the godless Shuravi occupation, but also adopt ideas such as "Death to America" and other people they consider infidels.

Unlike Syrian rebels today, Bin Laden had no al-Qaeda to join after receiving US-funded weapons and training, so he was forced to found it in 1988. After the Soviet withdrawal in 1989 and the Afghani government's fall in 1991, the group went on to call for a global jihad, which it carried out by bombing US embassies, a US navy ship and the World Trade Center (twice).

After Bin Laden's al-Qaeda carried out the September 11 attacks, the US initially dispatched a relatively modest CIA and Army Special Forces group to kill or capture Bin Laden and fight the Taliban which sheltered him, respectively. The force was actually relatively successful, as it essentially hit the Taliban where it was most vulnerable, civilian support.

Although it was well-known that Bin Laden was located in a cave in the Tora Bora mountains near the border with Pakistan, which gave the US military access, it was not until two months after the invasion that the US finally reached the apparently elusive area.

After the battle was over and the coalition captured the area, checking every cave, it turned out that Bin Laden had already fled to an unknown country, where he successfully remained to record jihadi podcasts and browse the internet via a USB drive for nearly 10 years, until he was captured and killed by US forces.

US Withdrawal From Afghanistan Expected Despite Counterinsurgency Needs
4. An Army Without Equipment


Just as the Soviets ran into trouble training a military force which would be prepared to fight and die for their idea of a country when another, considerably better-armed ally could do the same, the US ran into the same problem. As it turned out, Afghan troops were often more motivated to smoke weed and just generally try to have a good time.

This turned into a problem with the draw-down and withdrawal of US troops after 2011. While the Soviets still tried to supply the Afghan army with such things as attack helicopters, the US preferred to organize it into a big militia, as it did in Iraq after 2003. However, just as Iraq's new army failed to counter ISIL, Afghanistan's Humvee and MRAP-based forces are now struggling with a resurgent Taliban and are dependent on US airstrikes.

Just as the US became known for the torture techniques it used at Guantanamo Bay and Iraq's Abu Ghraib prison, Afghanistan had its own local variant, which used the same techniques: it chained prisoners to the ceiling and routinely beat them.

US Urged to Carry Out ‘Rigorous’ Inquiry Into Afghan War Crimes Claims
Bagram was not the only US torture prison uncovered in Afghanistan, although they have faced considerably less scrutiny than abuse reports from Guantanamo Bay. Unlike Guantanamo Bay, however, the Bagram prison was shut down in December 2014 while other sites are believed to remain.

While Florida pastor Terry Jones' "Koran Burning Day" led to deadly protests in Afghanistan and remain on his conscience, the US military's bureaucratic incompetence managed to burn many more copies of the holy book and kill more people than the pastor could have managed.

After the US Army removed 48 Korans from the Bagram prison library, which the prisoners used to pass each other notes written in the margins, they were sent into the incinerator in a different sort of clerical error from the Florida pastor's. As a result, violent protests rocked Afghanistan and led to the deaths of 41 people, including two high-ranking US military advisors.

It is a sad but well-known fact that pedophilia remains a widespread and even growing practice in Pashtun society despite being illegal in Afghanistan itself.

However, US troops were ordered to allow Afghan military officials to continue the practice of child abuse known as bacha baazi or "boy play."

In one well-publicized case, a US serviceman was relieved from duty and pulled from the country after confronting the practice and beating up an Afghan police commander. Tolerating the practice also backfired on US forces in 2012, when the "tea boy" of a local police chief living on a military base stole a rifle and killed three US Marines.

Although the AC-130 was crucial in carrying out the Kunduz hospital airstrike, it also took part in an aerial attack on the village of Azizazad, where a Taliban commander was reported to be hiding.

UN Trusts US to Investigate Itself, Will Hold Off on Kunduz Bombing Probe
As there is no way to see who is a Taliban commander from an AC-130, the airstrike methodically destroyed 8 homes and killed around 92 civilians.

In another case of air support gone bad, the US military dropped bombs on the village of Granai, which was the site of a firefight between the US and Taliban forces.

As a result, as many as 147 civilians were killed in the airstrike, most of them women and children. Meanwhile, there is virtually no data on Taliban casualties.

The US army itself faced a degradation in discipline as the conflict dragged on, with a variety of practices emerging, such as soldiers posing with the body parts of dead suicide bombers. In another incident, four US marines urinated on the bodies of four men who were said to be Taliban fighters but may have been local laborers.

US Takes Responsibility for Bombing MSF Hospital in Afghanistan
US servicemen also took internal issues out on Afghan civilians. A group of soldiers known as the "Kill Team" killed Afghan civilians in faked combat situations to pose with photos of their bodies and keep body parts as trophies. More famously, US Army Staff Sergeant Robert Bales went on a shooting spree in Kandahar in 2012, killing 16 civilians.

However, all of this is not simply the "Heart of Darkness" narrative of a place where men go mad and empires crumble, but a very specific foreign policy course taken by the United States, as showcased by one country.