Kiev May Now Have As Many as 16,000 Armed Deserters on Its Hands 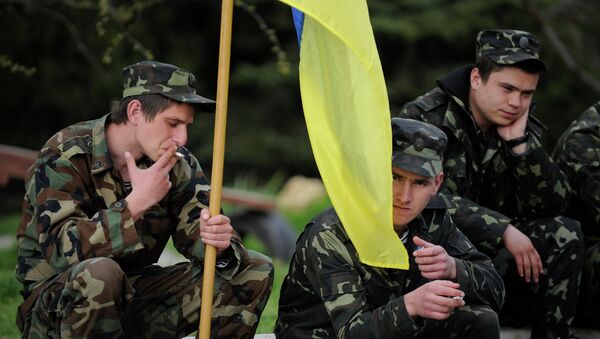 © AP Photo / Andrew Lubimov
Subscribe
As many as 16,000 personnel from the Ukrainian Armed Forces, many of them armed, are believed to have deserted the conflict zone in Kiev's so-called 'anti-terrorist operation' in eastern Ukraine, Chief Military Prosecutor Anatoly Matios told reporters.

"We have investigated 16,000 criminal cases against deserters, who left the zone of the military operation; a significant number left together with their weapons," Matios noted, in an interview for Ukraine's TV 112.

Matios also appeared to blame the country's Internal Affairs Ministry, noting that in the course of the past year, the ministry had caught and launched criminal cases against no more than a thousand of the suspected deserters.

"In the course of a year, the organs of the Internal Affairs Ministry have not been able to find more than a thousand of them. Where did they go? They did not fly away; they went home. This means that local police are not doing their job, with their monthly salary of 2,000 hryvnia [about $95 US]. It means that the whole system is not working."

Ukrainians Become Jehovah’s Witnesses to Avoid Conscription
Only a month ago, the Prosecutor's Office had declared that there were only 6,500 cases of desertion, emphasizing that the numbers have actually been declining through the course of the past year.

As Ukrainian media cited by Russia's Rossiyskaya Gazeta have reported, the forces most likely to desert together with their weapons have been fighters from Ukraine's ultranationalist volunteer battalions. After deserting, these individuals turn into criminal formations, using their weapons to carry out criminal undertakings in cities across Ukraine.

Last month, Colonel Alexander Pravdivets, the Deputy Chief of the Ukrainian Armed Forces' Mobilization Department, noted that nearly 27,000 men had managed to evade conscription during the country's sixth wave of mobilization, which ended in August. This amounts to over 50 percent of the total men who were called up. Army officials explained that draftees avoided them by going into hiding, moving to new addresses, or leaving Ukraine altogether, with the total number of medical exemptions on the rise.

000000
Popular comments
Ukies are not so stupid to be conned into fighting for a creation of the State of New Khazaria out of the Crimea (as the tatars vacated the land) with Odessa as capital. The Rev 2:9 mob of nudelmans,kagans,pyatts did not know FSB was listening to all their plans, the ukies may be dumb but Russians are not, and they grabbed the rook Crimea at the right time, chess game over- khazar dreams of a backup state if they are chased out of israel OVER !! RUSSIAN STATE HAS TO SUPPORT THE RUSSIAN ORTHODOX CHURCH, IT IS ONLY THROUGH ITS SPIRITUAL POWER THAT THE SYNAGOGUE OF SATAN HAS BEEN KEPT IN ITS PLACE IN RUSSIA, a return to bolshevism/oligarky will be too much even for the down to earth Russian people.