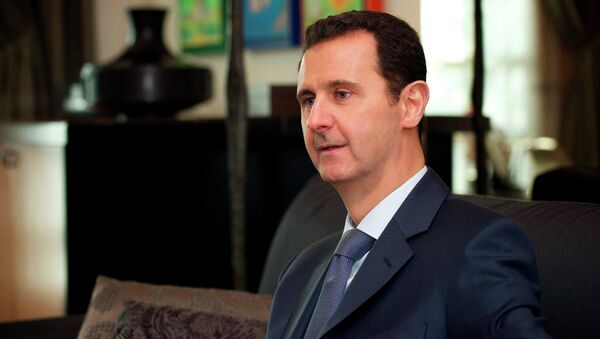 © REUTERS / SANA/Handout via Reuters
Subscribe
International
India
Africa
The partnership of Syria, Russia, Iran and Iraq will save the region from collapsing. Otherwise "the region will be destroyed".

Pres. #Assad to Iranian #Khabar #TV: The coalition consisting of #Russia, #Syria, #Iran, #Iraq must succeed or the region will be destroyed.

Russia started carrying out airstrikes against ISIL in Syria on Wednesday, following the request of Assad.

It's 'Simply Pathetic’ How US, France Demonize Russian Airstrikes in Syria
Russia, Syria, Iran and Iraq agreed last week to cooperate on security and intelligence sharing in Syria and established an information center in Baghdad to coordinate efforts in the fight against ISIL.

Assad said the coalition had high chances to succeed, as a number of countries had already expressed their support to the coalition.

The Syrian leader stressed that Moscow's role in the national reconciliation cannot be overrated.

President Bashar al-Assad to the #Iranian Khabar #TV: #Moscow3 is essential for the success of #Geneva3.

"When we reach a consensus as Syrians in the Moscow conference, any other conference, or any other dialogue will be bound by the consensus that we will reach in Moscow. That is why we said that Moscow 3 is essential for the success of Geneva 3," Assad told Khabar TV in an interview.

Syria's warring parties have met twice over the last three years at UN-backed Geneva conferences and twice in the Russian capital Moscow but failed to reach a practical solution toward ending the violence that has killed more than 250,000 people.

He added that Russia never tried to impose anything on Syria, especially in connection with the ongoing crisis in the country.

President Bashar al-Assad to the Iranian #Khabar #TV: The Russians have never tried to impose anything on us, especially in this crisis.

Assad promised to resign if it could facilitate the reconciliation in the war-torn country.

President #Assad to the Iranian #Khabar #TV: If my leaving office is the solution, I will never hesitate to do so.

President #Assad to the Iranian Khabar #TV: Whatever the Syrian people decide will be binding to us as a state and to me as an official.

The Syrian authorities support any political measures in the country along with counterterrorism efforts, Assad said.

The Syrian president also noted that a political solution to the Syrian conflict was unlikely until a number of states continued to support terrorism.

ISIL Expanded Territory After US Created Coalition - Syrian Ambassador
Syria has been mired in a civil war since 2011, as government forces loyal to Bashar Assad have been fighting several opposition and radical extremist groups, including the Nusra Front and ISIL.

The United States and some of its allies have been conducting airstrikes against ISIL positions in both Syria and Iraq since 2014. However, the efficiency of the US-led coalition's airstrikes is questionable.

President #Assad to the Iranian Khabar TV: Since the US led coalition was formed, #ISIS expanded geographically and its recruits multiplied.

The US-led coalition has conducted airstrikes on ISIL positions in Syria without the permission of Damascus, even though international law permits the use of force in a foreign country only if it has been authorized by the UN Security Council, as an act of self-defense, or at the request of the country’s authorities.