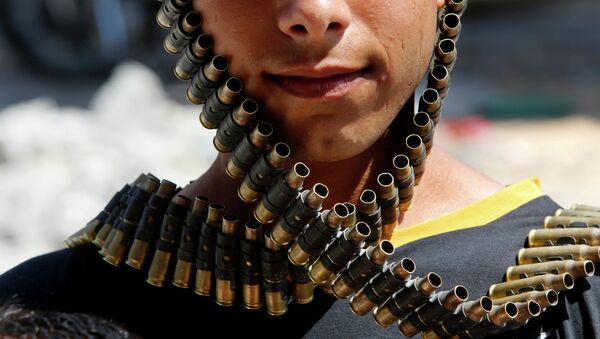 Over 450 Syrian militants and 250 criminals wanted by government have laid down their arms and return to peaceful life in the south-west of war-torn country.

ISIL Militants Fleeing Russian Airstrikes in Syria – Lebanese Media
Roughly seven hundred armed militants and criminals surrendered themselves to the local authorities in the Syrian Daraa Governorate that is situated next to the border with Jordan in the last two days, national Syrian Arab News Agency Sana reported.

Hundreds of militants and other law offenders decided to hand themselves over to authorities under the terms of a national reconciliation program.

According to media reports, militants have surrendered their arms to law enforcement, including large numbers of machine guns, automatic weapons and sniper rifles.

The brightest example of the reconciliation program’s success, which was started by the Syrian government, occurred in the city of Homs in the west of the country in 2014. Over 1,500 militants, who had seized the city center, yielded themselves to authorities that time.

US and Russia Should Form Coordinated Coalition in Syria – Stephen Cohen
The program provides citizens with the opportunity to go through rehabilitation to start a peaceful life if they lay down their arms and stop fighting.

A full scale war has been waging in Syria since 2011. According to UN statistical data, the conflict has claimed the lives of more than 220,000 people. Various militant groups declared war on the legitimate Syrian government, the most notorious being the Islamic State and Jabhat al-Nusra jihadist groups.