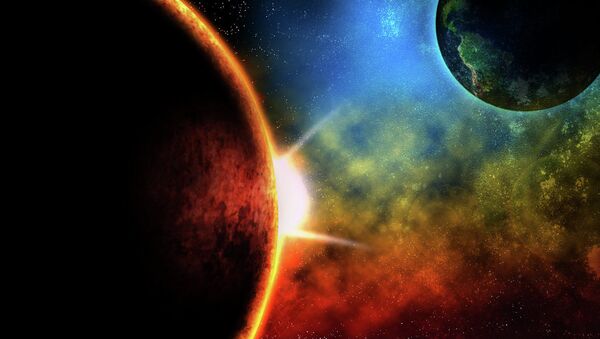 © Flickr / Cyril Rana
Subscribe
International
India
Africa
Now that liquid water has officially been found on Mars, scientists are warning of the risk of interstellar contamination that may put our planet’s ecosystem in danger.

Solar System Rocked by Discovery of Water on Mars
After decades of research and exploration of the Red Planet, NASA announced Monday the definitive existence of surface water on Mars. And where there is water, there’s likely life.

Germs resistant to highly inhospitable environments — hot, salty, devoid of light — have been found and studied here on Earth. Astrobiologists have long suggested this same kind of highly resilient, primitive life could be possible on other planets, too. The announcement of water on Mars this week suggests they may be right.

Water on Mars??? What's next? Microscopic bacteria on Uranus?

Sure, science has no limits, but what about Earth’s security? How can the highly specialized materials used on interplanetary missions, which may come in contact with extraterrestrial microbes, be secured so that they don’t bring home dangerous Martian contamination?

NASA’s “safety instruction” for planetary exploration, NPD 8020.7G, dating back to 1999, addresses the challenge. In theory, at least.

“The conduct of scientific investigations of possible extraterrestrial life forms, precursors, and remnants must not be jeopardized. In addition, the Earth must be protected from the potential hazard posed by extraterrestrial matter carried by a spacecraft returning from another planet or other extraterrestrial sources,” it reads.

World
NASA Concerned With Earth Bacteria Infecting Mars on 2020 Mission
Earlier this year, astrobiologists raised concerns on the issue in reverse: contaminating other worlds with Earth’s bacteria. Several NASA planetary protection officers stressed that there is an urgent need to develop a strategy to ensure that bacteria doesn’t travel from Earth out to the cosmos.

Modern missions are even more susceptible to transporting bacteria than earlier Mars expeditions were, as the latest spacecraft contain complex, sensitive equipment which cannot be sterilized as thoroughly.

Traditionally, a spacecraft is cleaned with the application of extremely high temperatures that destroy any bacteria. NASA’s 1976 Viking lander, for example, was doused extensively with thermal heat. Newer spacecraft, though, contain complex, sensitive equipment that can’t be subjected to the same kind of processes.

Water on Mars? If bacteria is found in it I'm gonna go wild.

There is an urgent need to figure out a solution, however. Now that we know water is there, the race to figure out what that means is officially underway.