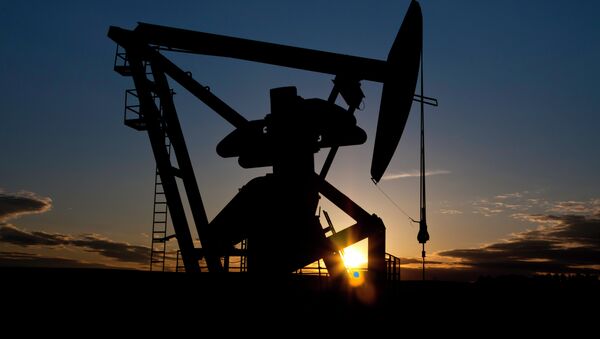 © Flickr / Dana Schagunn
Subscribe
International crude prices rose slightly as weak manufacturing data from mainland China were offset by Total’s announced production cuts and a decline in US oil stockpiles due to the accelerating growth there.

Oil Price Unlikely to Return to $100 Per Barrel - Russian Finance Minister
Kristian Rouz — Brent crude contracts are trading at just below $50/bbl as the French energy giant Total lowered its projected oil production target till 2017, while the US crude stockpiles also dropped this week, yielding further support to prices.

Oil valuation is on a modest rise even though mainland China’s lackluster data on factory output indicated the Communist nation’s manufacturing had fallen to its 2009 low, stirring more demand-side concern.

The Middle Eastern factor also supports the prices, as the anticipated military escalation in Syria may disrupt supplies, including from the Islamic State.

Brent crude oil is touching its psychological threshold of $50/bbl, as upside factors have outweighed the oversupply concerns this week. According to data provided by the American Petroleum Institute (API), US oil inventories dropped by 3.7 mln bbl last week, while shipments from the crude storage hub in Cushing, OK, saw their weekly decline by 500,000 bbl.

Iran Starts Preliminary Talks on Oil Field Development With Energy Giants
US oil production is slowing due to the low prices affecting the domestic market with a possible market correction in sight. Consequently, Brent crude rose by $0.55/bbl to $49.63/bbl. US light oil rose to $46.86/bbl on the news.

Albeit mainland China, the world’s second-largest consumer of oil, is suffering from a massive contraction in industrial activity, with factory output at its 2009 levels due to the global overproduction of manufactured goods, the upbeat US macro data, coupled with optimistic anticipations, helped support the oil price.

Another factor affecting the international oil market is Total, Europe’s second-biggest oil producer, wrapping up some of its crude output till 2017 as, again, the currently low prices render oil extraction less profitable. Total announced it would likely supply 2.6 mln bpd as compared to the previous plans of producing some 2.8 mln bpd in the aforementioned period.

Previously, other global energy majors, like Chevron and Royal Dutch Shell, cut their capital spending for this year, meaning less oil output in the near future.

The French oil giant said even at a price of $60/bbl they would hardy resume some of their wrapped-up activities due to their low profitability. Total will also cut their investment in 2016 to $20-$21 bln from $24 bln this year and as much as $28 bln in 2013. The French energy enterprise will reduce investment even further in 2017, down to $17-$19 bln from the previously planned $20 bln.

Drop in Russia's Oil Extraction Possible If Prices Fall Beyond $40/Bbl
This planning could be revised even further downward in the event that more downward pressure on global oil valuation occurs. Moreover, Total put on hold some of its ventures in Australia, Italy and Norway, while also increasing their cost savings by as much as 50% by 2017, from $2 bln to $3 bln in order to endure a stable payment of dividend.

According to recent observations by oil market researchers from Energy Aspects, international demand for oil in the second half of 2015 will add only 1 mln bpd, compared to the actual figure of 2 mln bpd in the first half of the year.

That said, as global demand is slowing, oil production becomes less profitable. The decline in international oil production may thus support crude prices at their current level for the sake of profitability.

However, mainland China’s weakness and low oil production breakevens in the US and Saudi Arabia might as well further undermine the price, pushing less profitable businesses out of the market. Nonetheless, the global oil market is nearing its balance between supply and demand.