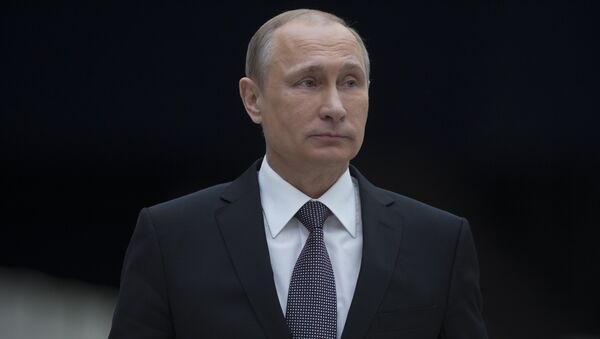 Moscow plans to stop the Syrian Civil War by bringing together and promoting international cooperation. Currently, the Kremlin is said to be actively working on diplomatic front, carrying out "secret" talks and striking deals with several confronting sides, the newspaper said.

"The idea is to unite the world in a fight against Islamic extremism, and at the same time Vladimir Putin wants to become a hero by becoming the man who solved the Syrian conflict," Le Temps cited Syrian journalist and human rights activist Haytham Manna.

The question is — will Russia manage to bring together all the "scattered sons" of the Syrian war, whose disagreements fuel the conflict, make them talk to each other and find the middle ground?

Obama Welcomes Putin’s ‘Constructive’ Support on Syria
Russia wants to convince everyone that its plan isn't only possible, but in fact the only viable option there is, Le Temps said.

According to Putin's plan, the fight against ISIL terrorists will be carried out by four main forces: Bashar al-Assad's Syrian National Army, the Iraqi Army, Kurds and military formations made up from other anti-ISIL forces, including the opponents of the al-Assad regime. Most importantly, Moscow doesn't want Syria to turn into ungovernable chaos, similar to Libya; that's why Putin stresses that the key role should be given to the Syrian National Army as the main fighting force, the French newspaper reported.

At the same time, Moscow is actively involved in a diplomatic campaign to persuade skeptics. Putin wants to work together with the UN, creating a platform for a dialogue in which all actors will have their voices heard. Soon, Putin will address the UN General Assembly and bring up the Syrian issue. Furthermore, not far off are his meetings with Saudi King Salman bin Abdulaziz Al Saud, Israeli Prime Minister Benjamin Netanyahu and possibly US President Barack Obama, Le Temps said.

Syrian Conflict Can't Be Resolved Without Putin – German Politicians
To successfully implement his plan, Putin understands that he needs to respect and take into consideration the interests of all parties involved.

Syria has been mired in civil war since 2011, with the government of President Bashar Assad fighting against many opposition factions and militant groups, such as ISIL and the Nusra Front. As a result of the four-year-long civil war, some 7.6 million people have been internally displaced in Syria and another four million are living as refugees outside the country.