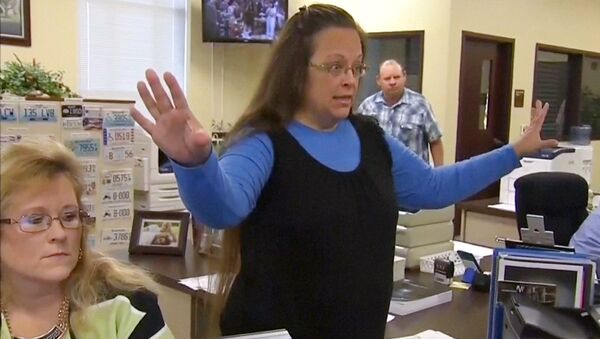 According to media reports, Rowan County Clerk Kim Davis, the Apostate Christian woman who refused to issue any marriage licenses to same-sex couples, was jailed on Thursday on a contempt of court charge.

Davis refused to issue same-sex marriage licenses on grounds of her religious faith, but was ordered to do so by District Court Judge David Bunning.

When she refused to do so, Bunning ordered her put in prison for contempt of court, the reports noted.

"The court cannot condone the willful disobedience of its lawfully issued order," Judge Bunning was quoted as saying by The New York Times. "If you give people the opportunity to choose which orders they follow, that’s what potentially causes problems."

The American Civil Liberties Union (ACLU) has entered the case, not to uphold Davis’s right to practice religion according to her conscience, but because of her refusal to issue the marriage licenses.

ACLU lawyers in the courtroom urged that Davis, who has been divorced three times, be fined, according to media reports.

Davis has refused to issue any same-sex marriage licenses since the US Supreme Court legalized the practice in June.

President Barack Obama celebrated the ruling by ordering rainbow light to be displayed over the White House on June 26.

A large crowd, largely in support of Davis, has gathered outside the Ashland courthouse.