US Population Split on Same-Sex Marriage After Court Ruling - Poll 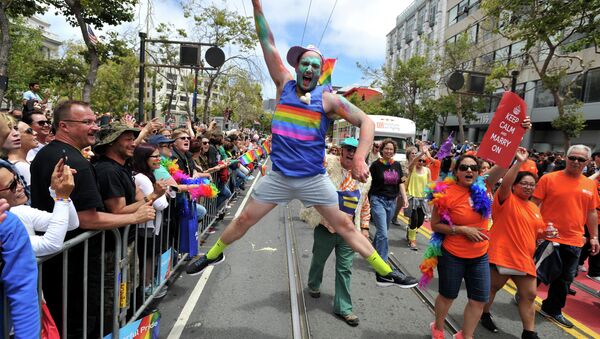 © AFP 2023 / Josh Edelson
Subscribe
International
India
Africa
42 percent of US citizens favor allowing same-sex couples to be legally married, while 40 percent oppose it, according to the poll.

Kerry: US Supreme Court Gay Marriage Decision Sends Clear Message to World
MOSCOW (Sputnik) — Citizens of the United States are divided in their opinion on same-sex marriage, the results of a poll published Saturday show.

The survey, conducted by Associated Press and GfK market research firm, came after the Supreme Court ruled on June 26 that same-sex marriage must be legalized at a federal level.

According to the poll, 42 percent favor allowing same-sex couples to be legally married, while 40 percent oppose it.

Supreme Court Finally Ends Legal Uncertainty Over Same-Sex Marriage - Obama
The percentage of those strongly supporting and strongly opposing same-sex marriage in the United States was equal and stood at 29 percent.

A total of 39 percent approved the supreme court’s ruling, while 41 percent said they were against it.

Before the Supreme Court decision in June, 37 out of 50 US states and the District of Columbia allowed same-sex marriage.

The poll was conducted between July 9 and 13. A total of 1,004 adults have been interviewed during the poll.