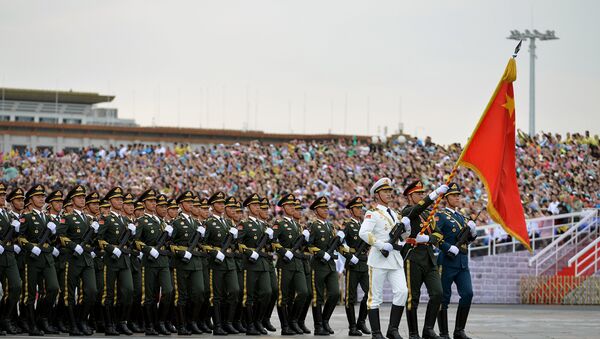 Presidents, prime ministers and high-ranking officials of almost 50 countries will gather in Beijing to take part in the events.

The organizers of the parade revealed some of the classified details following the final rehearsal that was held last week.

China Reveals Deadliest 'Guam Killer' Missile for First Time
According to official sources, about 12,000 servicemen will take part in the parade, including 11 infantry phalanxes, a mechanized convoy of 27 formations and ten echelons of aviation. Two more formations comprising Chinese Communist Party and Kuomintang veterans with average age of 90 years, will participate in the parade.

A female guard-of-honor unit will join the parade for the first time. The young women will march in three 17-strong platoons, representing the Army, the Navy and the Air Force of the People’s Republic of China.

About a thousand foreign servicemen will take part in the parade for the first time.

China Displacing Monopoly of US Dollar, Bretton Wood System
Afghanistan, Cambodia, Fiji, Laos, Vanuatu and Venezuela have sent seven soldiers each. As many as 31 more countries, including Iran, France, Poland, Vietnam, and the South Korea, have said they were ready to send high-ranking military observers.

A combined chorus of the People's Liberation Army of China with over 2,400 students of military universities will perform about 30 musical compositions for the first time during the parade.

According to official data, China will display about 500 units of military equipment of 40 types, as well as 200 planes of 20 types, including bombers, fighters, carrier-based aircraft, coastal patrol planes, tanker aircraft and helicopters.

Will US Slap China With Sanctions During President Xi’s Washington Visit?
The Chinese authorities said that 84 percent of equipment would be shown for the first time.

According to media reports, seven types of missiles and a new bomber designed for high-precision and long-range strikes will be displayed at the Tiananmen Square.

The entire parade will last for about 70 minutes.

The official logo of events marking the 70th victory anniversary includes a large red figure "70" with five doves on top and a V-shaped section of the Great Wall of China symbolizing victory.

China’s Minister of Environmental Protection Chen Jining said that clean air was an inherent component of a successful parade and of the Chinese capital’s positive image in general.

Chinese authorities have decided that Beijing should have the same air-quality standards that were used during the Asia-Pacific Economic Cooperation (APEC) events in China in November 2014.

US Overestimates China's 'Threat': Beijing Not Stepping Outside Rules
At that time, Chinese authorities launched a large-scale program to reduce air pollution levels by shutting down industrial plants, freezing construction projects and reducing the number of vehicles. This resulted in blue skies over Beijing throughout the summit.

Coal burning power plants, over 10,000 industrial plants and about 9,000 construction sites are being shut down in Beijing and neighboring regions between August 28 and September 4, according to media reports. In case of violation of the regime, companies will be banned from bidding for tenders in Beijing’s administrative districts for up to six months.

The Chinese authorities restricted car traffic in the capital starting on August 20.

The measures are expected to reduce local pollution levels by 40 percent.

On August 1, the gates of Tiananmen Square were closed, and many city districts became almost paralyzed during the parade’s final rehearsal on August 22−23. Stores, restaurants, banks, parking lots, underground stations and office buildings in the vicinity were closed.

No Happily Ever After: 'Strategic Disagreements' Divide China, US
Bank holidays were declared on September 3-5, city schools will open on September 7. The national stock exchanges will also be closed during the celebrations.

A curfew will be declared September 2−3 on the Tiananmen Square and the central Beijing’s Wangfujing Street, which is popular with tourists.

Beijing’s Shoudu and Nanyuan airports will also be shut down on September 3, between 9:30 a.m. (01:30 GMT) and 12:30 p.m. local time. The Civil Aviation Administration of China expects thousands of passengers to experience delays at the local airports, despite the fact that many airlines have canceled their flights.

This will be the 14th military parade since the People’s Republic of China was officially established in October 1949. Since then, China has hosted military parades to mark the Education Day alone.

Around 30 Documents to be Signed During Putin's Beijing Visit
The decision of the Chinese government caused controversial response in media, with debates around the possible participation of foreign leaders becoming just as intense as those before the May 9 Victory Day parade in Russia’s Moscow.

The presidents of Belarus, Russia, South Korea, the Republic of the Congo, Kazakhstan, Egypt, Kyrgyzstan, Laos, Mongolia, Pakistan and South Africa will be present at the celebrations. Sudanese President Omar Bashir, wanted by the International Criminal Court over genocide charges, will also visit the Chinese capital for the victory events.

Japan’s Prime Minister Shinzo Abe, along with several Western leaders, has declined the invitation to take part in the parade.

Western media have speculated that the parade is aimed at displaying China’s military strength to neighboring countries, particularly Japan, amid territorial disputes in the East China and South China seas.

Commenting on the absence of some Western leaders, Chinese Vice Minister of Foreign Affairs Zhang Ming said that every country has the right to decide whether to accept China’s invitation. He stressed that the celebrations were in no way directed against Japan.

Tokyo has expressed discontent with the participation of UN Secretary-General Ban Ki-moon in the celebrations, saying that the visit contravenes neutrality of the UN chief.

Apart from the UN Secretary-General, heads of 10 international organizations, including UNESCO, the Shanghai Cooperation Organization, the Commonwealth of Independent States, the International Committee of the Red Cross and the World Health Organization will attend the parade.