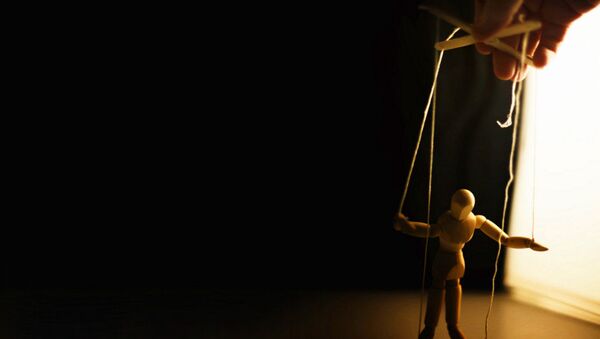 Japanese Prime Minister Shinzo Abe is behaving like a puppet of Washington when supporting legislation that would allow military deployments abroad, the co-founder and director of the Peace Boat NGO told Radio Sputnik.

MOSCOW (Sputnik) – The lower house of the Japanese parliament has already passed the legislation which would permit the country’s troops to participate in military action abroad. The constitution currently only allows Tokyo to engage in warfare in cases of self-defense.

"By cooperating with the US — Abe tries to make Japan a military country. This is a totally different situation…It is difficult to say if Shinzo Abe is a puppet of Washington or not, but he definitely behaves as a puppet," Tatsuya Yoshioka, whose organization participated in mass rallies on Sunday, said.

Thousands Protest in Japan Against Use of Army Abroad
On Sunday, tens of thousands of people gathered outside of the parliament, demanding resignation of Prime Minister Shinzo Abe and protection for the peaceful Japanese Constitution. Since June, when the lower house passed the legislation, numerous protests have taken place in the country.

Under the legislation package, Japan’s government will be able to dispatch its defense forces abroad to assist its allies without the need for parliamentary debate or special laws.

After World War II, the Japanese government amended its constitution so that the military could not be used to solve international disputes. Japan's current armed forces are called self-defense forces and their functions are severely limited.