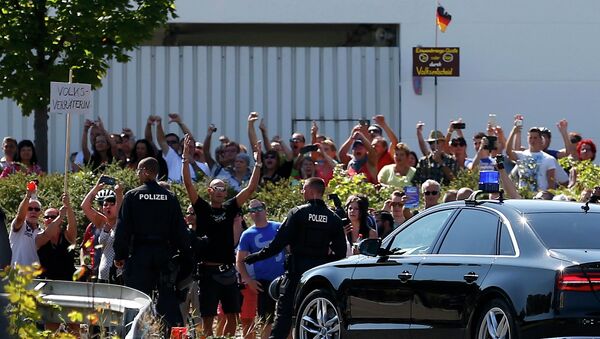 A heckler who decried Merkel as a traitor for her advocacy of refugee migrants during her stopover in the eastern town of Heidenau has been charged by German police.

"We know of the video and have initiated a criminal case for libel," Dresden police spokesman Thomas Geithner told the Bild newspaper late on Thursday.

The person who filmed the video depicting the suspect shouting slurs at Merkel has reportedly identified the heckler as a red-haired woman, who was carrying a sign.

Heidenau was the scene of anti-migrant protests over the weekend, where over 30 police officers were reportedly injured in clashes with far-right activists.

German Activists Boo Merkel During Visit to Protest-Hit Heidenau
Merkel visited a new refugee center in the town, the target of the far-right extremists’ ire, on Thursday, where she said there is "no tolerance" for hatred.

A state of emergency was declared in Heidenau the same day, and all public events were canceled, as threats of arson and anti-immigrant attacks from right-wing activists persisted.

German Interior Minister Thomas de Maiziere announced last week that the number of expected asylum seekers and refugees arriving to the country was expected to increase fourfold this year.

Germany is one of several European countries reeling from the ongoing migrant crisis, as hundreds of thousands of people flee their homelands in the Middle East and North Africa in the hope of finding refuge in the European Union.