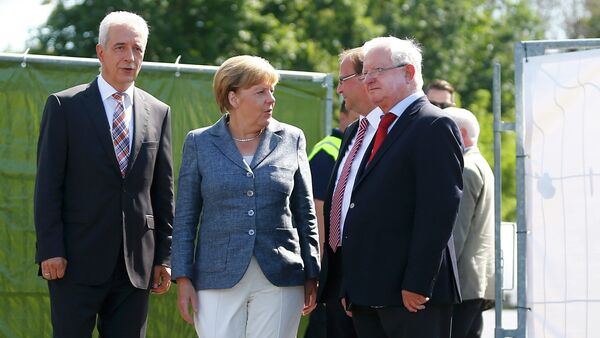 German Chancellor Angela Merkel was booed and hissed at on Wednesday as she arrived at a new asylum center in the small eastern German town of Heidenau that has been the target of protests lately, local media reported.

MOSCOW (Sputnik) — On Saturday and Sunday, a group of suspected neo-Nazis clashed with police forces, protesting the opening of the new refugee shelter in Heidenau, leaving more than 30 police officers injured.

About 150 protesters verbally abused the chancellor, shouting insults and chanting as Merkel arrived at the asylum center, according to Der Spiegel.

Merkel is expected to strongly condemn anti-migrant protests in the country during her speech at the shelter, as the clashes in Heidenau form part of a series of incidents in which radical extremists have attempted to disrupt services to refugees in the country.

German Anti-Refugees Protests Do Not Reflect Attitude of Most Europeans
On Sunday night, a fire occurred in a building being constructed as a refugee shelter in the city of Unterweissach, in southwestern Germany. German police have not ruled out the possibility of arson.

A similar incident happened on Tuesday morning when a facility intended to house asylum seekers in Nauen, near Berlin, was set on fire.

On August 19, German Interior Minister Thomas de Maiziere said up to 800,000 asylum seekers and refugees are expected to arrive in the country by the end of the year, three times as many as in 2014.