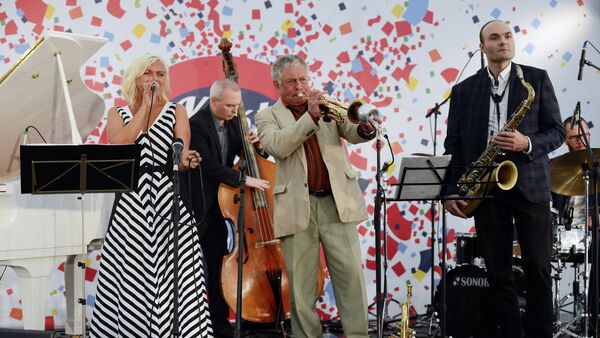 MOSCOW (Sputnik) – Koktebel has hosted the festival annually since 2003, with its seashore concerts given by both famous jazz stars and budding musicians.

The festival’s main objective is to change the current attitude toward jazz, seen as old and outdated music style, and show that it dynamic and vibrant today.

In 2014, the festival was sponsored by the Rossiya Segodnya International Information Agency with support from the Russian Ministry of Culture. It became the first major international cultural event to be held in Crimea after its reunification with Russia.

The festival showcased the best jazz bands, not only from different regions of Russia but also from Brazil, the United States, Israel, the United Kingdom, India, Armenia, Germany, Belgium, and the Netherlands.

Each day, from 6 p.m. to 11 p.m., the main open-air beach stage served up performances from jazz stars like the Pyotr Vostokov Big Jazz Orchestra, the Anton Gorbunov Quintet, Andrei Kondakov and the Brazil All Stars, Denis Shvytov and the Silver Woman project, Huun-Huur-Tu, Anna Klesun and Esh, among others. The festival headliners were Yakov Okun’s International Jazz Quintet and Deborah Brown, Valery Ponomarev and the We Remember Art Blakey sextet, Tom Harrell, and the Jamal Thomas Band.

Yet another stage was reserved for young talent and a stage for classical blues and jazz lovers was set up on the grounds of the Voloshin Museum.

In 2015, the Koktebel Jazz Party festival will be held from August 28 to 30 under the tagline Five Continents Jazz. The three evenings of the festival will boost performances from leading jazz musicians and groups from Europe, Asia, Africa, Australia and America.

The three-day jazz marathon will be inaugurated by the Crimean virtuoso guitarist Enver Izmaylov, the main prize winner at the European International Guitarist Competition in Lausanne, Switzerland.

There will be two stages — an open-air beach stage and a stage on the Maximilian Voloshin Museum grounds, where jazz seminars have also been planned. A glider plane show will accompany the festival throughout. The final event of the festival will be the Koktebel Jam Session, which will feature a direct satellite linkup with musicians in Israel.

All proceeds from the festival will go toward financing cultural institutions in Crimea.

In 2014, the general partner of the Koktebel Jazz Party was Rosseti, the largest operator of energy grids in Russia; its official partner was Russian Railways; and the official ticket vendor was Partner.ru.

For 2015, the general information partner is the Russian State Television and Radio Broadcasting Company (VGTRK). The festival partners have been joined by the Red Square company, which has vast experience in organizing and filming concerts.