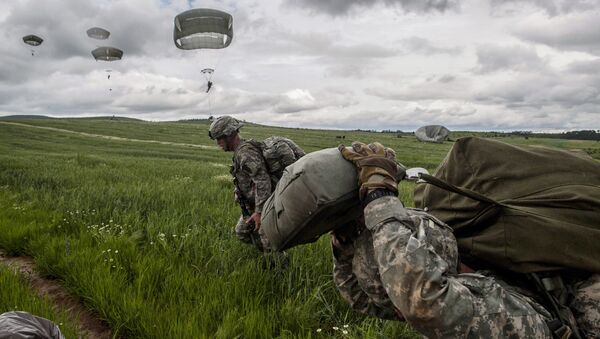 The US Army is sending hundreds more soldiers to Europe to reassure its NATO allies.

WASHINGTON (Sputnik) — The US Army is sending hundreds more soldiers to Europe to reassure its North Atlantic Treaty Organization (NATO) allies in a display of force, the Army Times reported.

The US Army announced on Thursday that approximately 450 US soldiers will be deployed to Germany in November 2015, the report said.

The troops are being sent from Fort Hood, Texas and will be deployed for nine months as part of a regular rotation of forces to support, in part, Operation Atlantic Resolve and US Army Europe, the report read.

Over 1,000 NATO Airborne Forces Take the Plunge Over Germany During Drills
After arriving in Germany, the force will carry out medical transport and aviation operations throughout Europe in cooperation with other US units and formations from other NATO member states, it added.

“Providing trained and ready forces in support of US Army Europe and NATO shows our commitment to improve interoperability and strengthen relationships,” said Maj. Gen. Michael Bills, commander of the 1st Cavalry Division, was quoted as saying.

The US Army launched Operation Atlantic Resolve in spring 2015 last spring “in an effort to reassure America’s allies in Europe amid growing concerns over Russian aggression.”

Atlantic resolve consists of a series of exercises and training events that started in Poland and the three Baltic States of Lithuania, Latvia and Estonia that has now been extended also to Romania, Bulgaria and other NATO countries.