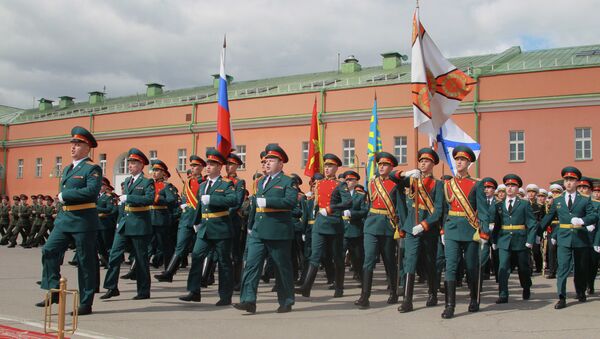 © Sputnik / Vitaliy Belousov
/
Go to the photo bank
Subscribe
Russia's 154th commandant regiment arrived in Beijing on Tuesday to rehearse for a parade that has been called unprecedented in the history of modern China.

Russia's 154th commandant's regiment arrived in Beijing on Tuesday to rehearse for the September 3 parade on Tiananmen Square commemorating the 70th anniversary of China's victory against Japan, according to diplomatic sources.

The parade is set to commemorate the Chinese people's 1945 victory in the War of Resistance Against Japanese Aggression in World War II which China terms the World Anti-Fascist War. Russian President Vladimir Putin has also been invited to attend.

"This is an unprecedented event for China. We hope that the upcoming parade can connect the past with the future, strengthen China's relations with the international community and also spread the idea of peace and development," Major General Qu Rui, deputy director of the parade said.

Chinese Honor Guard Arrives in Moscow for First Time Ever
The event will be China's first ever parade involving foreign troops, as well as veterans who fought for the Chinese Communists' rival Nationalist Kuomintang party.

China's Ambassador to Russia then said the move would "assist in making the two countries' inter-military cooperation enter a new stage of development."

China's 70th anniversary Victory parade is also unique in that it will feature not only Chinese and foreign troops, but also veterans who fought for the Nationalist faction in China's Civil War, the Kuomintang.

After the end of China's Civil War in 1949, which was won by the Communists, many Nationalist officers and soldiers fled to Taiwan, which China has complicated relations with.

According to Aleksandr Isaev of the Russian Academy of Sciences' Far East Institute, China's goal in the parade is to show its military strength and demonstrate that it is one of the winning powers in World War II.

"As in Russia, this is a founding moment, when one can talk of the unity of the nation, the necessity of strengthening patriotic attitudes," Isaev told Nezavisimaya Gazeta.

The Empire of Japan invaded China, then in the midst of a civil war, in 1937, occupying much of the east of the country, as well as Manchuria, Taiwan and large coastal cities.

The Soviet Union assisted China militarily, although it switched to covert support, training and arming Chinese forces, when it signed a non-aggression pact with Japan in 1941. The USSR declared war against Japan on August 8, and Soviet and Mongolian troops liberated Manchuria, which was then returned to China.

Other than China's participation in the May 9 Moscow Victory Day Parade, Russia and China have been increasing military cooperation with Russian troops participating in exercises in China.

At the same time, the Chinese Navy has been taking part in exercises with the Russian Navy, including in the Mediterranean.

According to Russian Foreign Minister Sergei Lavrov, the exercises do not mean that Russia supports China's territorial ambitions in the South China Sea.

"We do not consider attempts to give these disputes an international character useful. Such attempts, as a general rule, are aimed not at the rapprochement of countries, but to gain some sorts of points on the international arena," Lavrov told Channel News Asia on August 5.

Most recently, Chinese troops participated in Russia's International Army Games, which concluded on August 15. Russia and China are to conduct their next naval exercises on Thursday in the Sea of Japan and the Peter the Great Gulf.