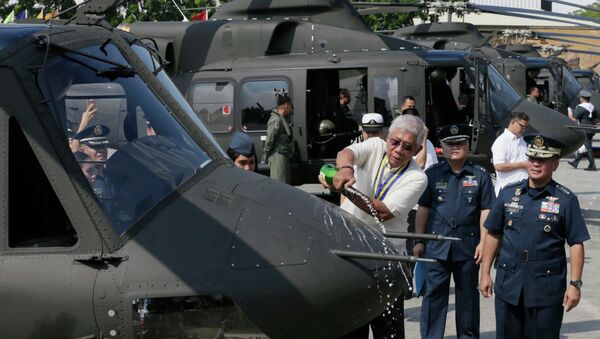 The Philippines can only afford a "frugal" military upgrade, defense officials said Monday, despite a proposed 25% increase in next year's defense budget amid growing maritime tensions with China.

"The goal of updating and modernizing our armed forces is a long and painstaking process," Defense Secretary Voltaire Gazmin said at a ceremony for the commissioning of 10 newly acquired air force helicopters.

"That means we have to be frugal and acquire reliable platforms at very reasonable costs… as allowed by our meagre financial resources."

The increase in defense spending has been prompted partly by China's moves to stake its claim to most of the South China Sea, including building new islands in the Spratly archipelago and taking effective control of Scarborough Shoal after a standoff with the Philippine Navy.

Even with the budget increase, the government must still divide resources between external defense and internal threats like insurgencies and natural disasters, Gazmin and other security officials added.

Even with the new attention that is being dedicated to China, communist and Muslim insurgencies remained a priority, according to defense department spokesman Peter Paul Galvez.

"We are first focusing on internal security and in the succeeding horizons, we will go towards external defense," he said, adding that China "should stop their island-building. That steps up the pace of militarization," Galvez said.