What Does Yuan Devaluation Mean for Chinese Cooperation With Russia? 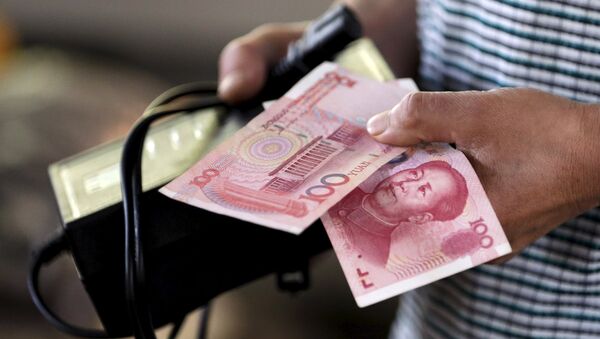 Dr. Ming Wan, director of the Political Science Division at the School of Policy, Government, and International Affairs at George Mason University, spoke to Sputnik about China’s currency devaluation.

“The timing was surprising but it was coming as China was trying to internationalize the yuan.”

Beijing has once again cut the yuan to dollar guiding exchange rate. That’s after the national currency’s Tuesday plunge of almost 2 percent. Wednesday’s additional 1 percent devaluation resulted in the largest two-day lowering of the yuan in more than two decades.

Chinese Markets Unchanged as PBC Raises Yuan Rate After 3-Day Decline
“In the long run I think there will be a downward pressure on the yuan because even before the decision for months now there was a pressure on the yuan to depreciate. Hence, the Chinese Central Bank was intervening on a daily basis and now that China has said that it will introduce more market, which is what the IMF was asking China to do, we should see downward pressure as the Chinese currency continues to value stability.”

The devaluation of 7 percent this week was a ‘market reaction’ in line with what the United State and the IMF had been demanding of China,” said another expert earlier in an interview with Sputnik.

The move which sent shockwaves throughout Asian and North American stock markets is aimed at making Chinese exports cheaper and thus keeping investors interested in the country’s businesses.

Talking about China’s relationship with other economies, Wan said, “The political relationship between China and Russia is getting closer and there is still enormous economic potential. We shall see more cooperation on the currency side as well.”

Payments in Yuan Help Russia, China Reduce Exchange Rate Risks
“So it is mainly the members of US Congress who have criticized China’s decision for they have been criticizing China of currency multiplication but Congress was expecting the Chinese currency to go only upward,” Wan said.

China’s devaluation of the yuan was dwarfed by the massive upward valuation of the trading currency over the past few years, and had to be taken to match similar reductions in the levels of other East Asian currencies.

Wan also explained that now the speculation is mostly on US side as it is expected for the Federal Reserve to raise interest rates in September and now there is really pressure on that decision.