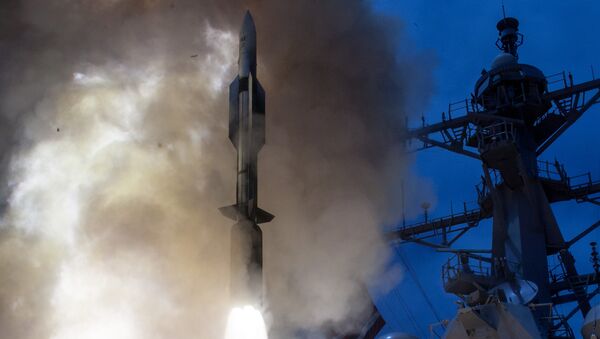 © Wikipedia
Subscribe
The United States has conducted a successful test of a modified Standard Missile-6, which is said to be the only US weapon capable of both extended range anti-air warfare and ballistic missiles interception in the terminal phase.

Despite its defense capabilities, the Raytheon-built SM-6 Dual 1 appears to offer, it is unlikely to become a game changer when it comes to protecting US ships, defense expert Harry J. Kazianis argues.

"Long-term trends suggest the advantage in naval warfare is slowly creeping towards the 'shooter' of the missile as opposed to the 'defender,' in this case the naval vessel," he noted in an article published by the National Interest.

The advantage essentially boils down to the number of missiles, according to Kazianis. The enemy could barrage a US warship with a large number of older rockets simultaneously, forcing the targeted vessel to repel the incoming attacks until it runs out of interceptors. The US ship would then be vulnerable to the best projectiles the adversary had to offer and could thus be defeated.

Pentagon Outranged by Chinese Anti-Ship Missiles, Scrambles to Save Face
Manufacturing more missile defense systems is not an option, the expert explained.

"Building more interceptors along with launchers and systems to power them would be very expensive, especially compared to the much lower price points of the missiles they are trying to protect against," he asserted.

The SM-6 is a supersonic surface-to-air missile deployed on cruisers and destroyers that defend against manned aircraft and drones, as well as land attacks and anti-ship cruise missiles. The SM-6 will also be used by the US Navy as part of the US anti-ballistic missile defense system, according to the manufacturer.

Raytheon, one of the largest US defense contractors, has delivered more than 180 SM-6 missiles to the US Navy to date.