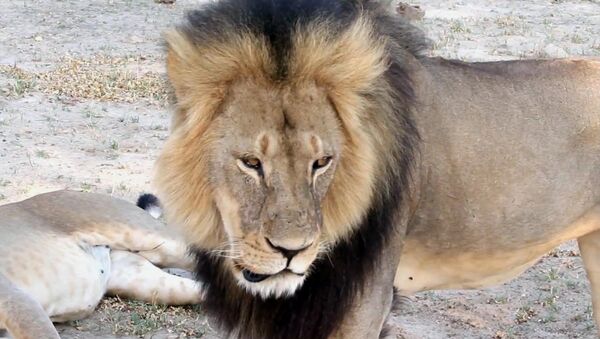 © AP Photo / Paula French
Subscribe
Zimbabwe has requested the extradition of the American dentist Walter Palmer who traveled to Zimbabwe and killed Cecil the lion after paying $50,000 for the hunt.

Walter Palmer was a “foreign poacher” who paid for an illegal hunt and he should be extradited to Zimbabwe to face justice, environment minister Oppah Muchinguri said on Friday, media reports.

Cecil the Lion's Killer Goes Off the Grid, But Protected by US Police
The minister said the Prosecutor General had already started the process to have 55-year-old Walter Palmer extradited from the United States.

“The illegal killing was deliberate,” she said at a news conference. “We are appealing to the responsible authorities for his extradition to Zimbabwe so that he can be held accountable for his illegal actions.”

The US Justice Department said it does not comment on extradition requests. Palmer must be charged in Zimbabwe before he can be extradited.

The dentist admits that he paid $50,000 to travel to Hwange National Park in Zimbabwe, and used a dead animal as bait to lure the lion out of the protected area. He then proceeded to shoot the majestic creature with a bow and arrow, track it for the next 40 hours, and eventually shoot him with a gun before skinning and beheading him.

Two of the men who assisted him on his poaching trip were arrested, and have subsequently made bail.

Meanwhile, Palmer has not turned himself in to the authorities who are seeking him and has gone entirely off the grid. He has shut down his business and deleted all forms of social media. His dental practice currently has a one star rating on Yelp after swarms of angry commenters took to the platform to express their outrage.