Ankara Carries Out Airstrikes on Kurdish Militants in Northern Iraq 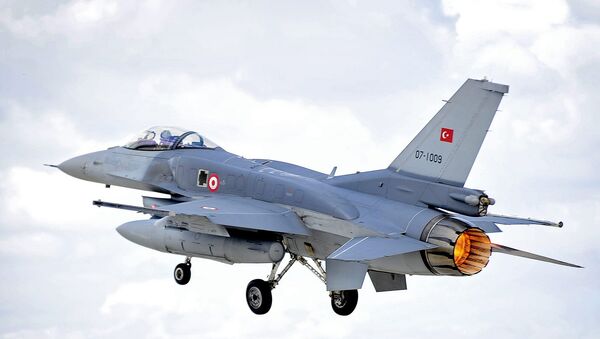 US Pledges Support to Kurdish Forces in Iraq in Fight Against ISIL
MOSCOW (Sputnik) — The Turkish Air Force carried out airstrikes on positions of the Kurdistan Workers' Party in northern Iraq, the Turkish government said in a statement on Saturday.

The Kurdistan Workers' Party (PKK), a political group listed as a terrorist organization by Ankara, was founded at the end of the 1970's to fight for self-determination of Kurds, comprising some 25 percent of Turkey's population.

"Effective airstrikes against targets of the Kurdistan Workers' Party in northern Iraq were carried out. Militants’ cantonments and armament depots were destroyed," the statement said.

The government added that Islamic State jihadist group positions in the north of Syria were attacked as well.

The United Nations and NATO were notified about the airstrikes, according to the statement.

Ankara Grants US Military Go-Ahead for Strikes Against ISIL From Turkey
It comes a day after the Turkish police conducted an anti-terrorist operation in 13 of the country's provinces, detaining 251 people suspected of involvement with various terrorist organizations, including ISIL and PKK.

On Monday, a Turkish citizen, allegedly associated with ISIL, carried out a terrorist attack in the Turkish city of Suruc close to the Syrian border in front of a cultural center for Turkish Kurds, killing 32 people and injuring over 100.

On Wednesday, the PKK claimed responsibility for killing two Turkish police officers in the nearby city of Ceylanpinar, claiming the policemen had backed ISIL.