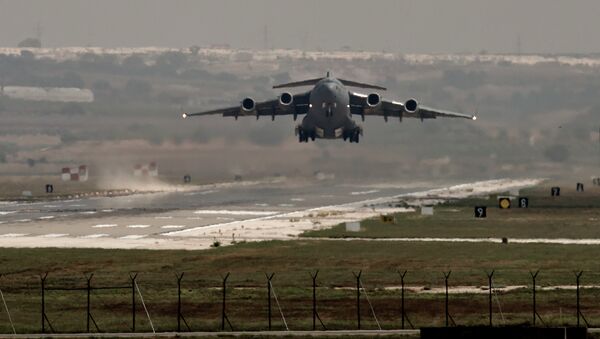 © AP Photo / Vadim Ghirda
Subscribe
International
India
Africa
In the fight against the self-proclaimed Islamic State terrorist group, the Turkish government has given the US permission to conduct air strikes from its soil, according to the Wall Street Journal and Turkish media.

According to Turkish media reports, an agreement between US President Barack Obama and Turkish President Tayyip Erdogan was finalized Wednesday night, after the two leaders spoke by phone.

The deal will purportedly allow US-led coalition aircraft to use Incirlik Air Base in eastern Turkey. The deal would allow for both manned and unmanned aircraft to conduct strikes against the terrorist group in Syria. According to Todays Zaman, the agreement will also establish "safe zones" along the border, where Syrian refugees will be kept under the watch of the Turkish military.

The Turkish military, however, will not take part in the airstrikes.

"I'm not able to talk about some of those issues because of specific operations security concerns," White House spokesman Josh Earnest said when asked about Incirlik, according to Reuters. "What we have acknowledged is that our coalition has access to a variety of bases throughout Europe and the Middle East for a variety of missions."

The Turkish government has repeatedly said it has no interest in launching offensives into Syria, but a recent wave of violence along the border may have changed that policy. On Monday, a suspected IS suicide bomber killed 32 students in a town along the border. On Thursday, border clashes with IS fighters left one Turkish officer dead.

"They're in a counter-ISIL fight right across the border," a defense official, speaking anonymously, told the Wall Street Journal.

The Turkish military has bolstered its security along the border as conflict between Kurdish militia, IS fighters, and Syrian security forces grows stronger.

According to a Sputnik correspondent based in Turkey, Kurdish militia fighters are amassing military equipment along the border.

Ankara had agreed to open airbases to the US military late last year, but that deal fell through after the United States failed to agree to certain conditions. Turkey had sought the establishment of a safe zone inside Syria which would be enforced with a no-fly zone, an idea routinely rejected by US officials.

While manned missions were previously not allowed out of Incirlik, the air base currently houses six US Predator drones which were allowed to conduct operations.