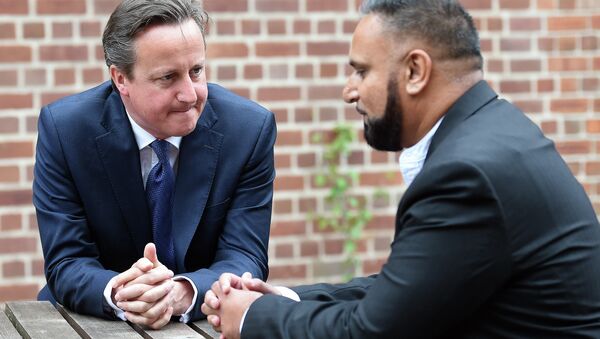 "Whatever its intentions — is thoroughly misguided, and destined to plunge this country, as well as the Middle East, into further chaos and misery", says Dr Ahmed. He calls on David Cameron to formulate the government's counter-terrorism and security policies "based on the vast array of academic studies of foreign policy, terrorism and radicalization, rather than the influence of far-right extremist ideology, and of narrow vested interest groups keen to profit from war and fear."

Prime Minister David Cameron, who was educated at Eton and Oxford University, told a school in Birmingham: " I understand that it can be hard being young, and that it can be even harder being young and Muslim, or young and Sikh, or young and black in our country. I know that at times you are grappling with huge issues over your identity, neither feeling a part of the British mainstream nor a part of the culture from your parents' background."

HERE are the key points outlined by David #Cameron in his Anti-Extremism Speech today. #PREVENTingDISSENT pic.twitter.com/WkJkdfEdd1

"The fourth and final part of our strategy must be to build a more cohesive society, so more people feel a part of it and are therefore less vulnerable to extremism."

In Denial Over Extremism

Also responding to the Prime Minister's narrative linking terrorism with community integration, or lack of it, the Islamic Human Rights Council (IHRC) accused the British government of being in denial over extremism.

"IHRC is again worried by the repeated suggestion that it is a failure to integrate which has made Muslims particularly prone to extremism.

"If government policy continues in this direction it only risks further demonising the Muslim community and reinforcing the perception that Britain is at war with Muslims, not extremism", according to the IHRC, which suggests David Cameron should "look closer to home when he complains that extremists are overpowering other voices within Muslim debate."

Read @davidwearing in The @Independent on why Cameron's "anti-extremism" speech was creepy and… extremist http://t.co/FRkFTHbdB6

Britain's unemployment figures have increased for the first time in two years. According to the Office for National Statistics, 1.85 million people were unemployed between March and May this year — an increase of 15,000 from the year before.

A report published in February suggested that young people, those aged 16 — 24 are three times more likely to be out of work than the rest of the population — the largest gap in more than 20 years.

My cartoon — UK unemployment on the rise pic.twitter.com/xA06wa0cy3

Analysis by the House of Commons library for Labour suggested that young people are worse off now than at any point since 1992.

And gang related crime in Britain has also risen for the first time in four years, according to the Office for National Statistics. More than 1,600 young people were stabbed in London alone in the last year — a 23 percent increase.

A recent article published in 'Shout Out UK', an independent news site which aims to give young people more of a voice said:

"Britain's teenagers prefer to be radicalized that live an average life. Some teenagers also have the idea that becoming a jihadi brings eternal rewards and that it can give you a lasting identity across the world as a figure of strength and power. In other words, it allows them to live a life far removed from that of the average British teenager."

Speaking to Sputnik in the wake of the terror attacks in Paris, Jonathan Birdwell, head of citizenship at think tank Demos suggested a reason why so many British youths are tempted to travel to Iraq and Syria to join jihadists militants is that: "They get to wear a balaclava and clutch a Kalashnikov and post a picture of themselves in Syria on social media saying, 'look at me, I'm a badass', which gives them a status they would never have achieved in the UK."

As long ago as 2004, a Home Office report 'Young Muslims and Extremism' suggested: "There is no simple cause and effect and we must avoid generalizing.

"We need to understand better the causes and extent of extremism, and the nature of links between extremism and terrorism. A strong Muslim identity and strict adherence to traditional Muslim teachings are not in themselves problematic or incompatible with Britishness."

Whatever words the British Prime Minister utters, the problem clearly isn't going away anytime soon, the rhetoric lost on those already radicalized.

A policy to tackle extremist Islamist radicalisation in UK which denies that there is ANY link with Western foreign policy will sadly fail.

It's believed around 700 teenagers and young adults have left Britain for Iraq and Syria to join jihadist militant groups. It is thought around 250 are back on British soil. The PM's latest counter-terror strategy will be unveiled in September.