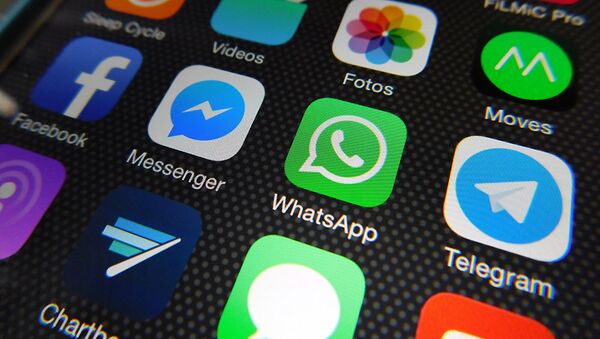 © Flickr / Microsiervos Geek Crew
Subscribe
International
India
Africa
A new UK report says messaging services and other internet companies are deleting personal data from their services to prevent Britain’s security agency GCHQ and the police having access to it.

The latest report from the Royal United Services Institute (RUSI), 'A Democratic Licence to Operate,' says that many – particularly the newer and smaller – messaging and internet companies are deliberately deleting personal data in an effort to prevent law-enforcement agencies gaining access to it.

The report follows the revelations in 2013 by former CIA contractor Edward Snowden that the UK and US governments were conducting mass surveillance programs. Following the allegations, a series of inquiries were set up in the UK into the extent to which GCHQ and the police were accessing peoples’ emails and internet activity.

Should you be worried about the Snoopers' charter? (It also means FBmessenger and WhatsApp could be banned in the UK) pic.twitter.com/EhkdumPbGZ

The UK was forced to introduce emergency legislation after a ruling found GCHQ had gathered communications data in breach of articles 8 and 10 of the European Convention on Human Rights (ECHR). Article eight refers to the right to respect for private and family life and article ten protects freedom of expression.

British Home Secretary Theresa May is set to re-introduce the controversial Draft Communications Data Bill – otherwise known as the Snoopers’ Charter – which will force British internet service providers to keep huge amounts of data on their customers and to make that information available to the government and security services.

I thought the whole point of GCHQ was its codebreakers. Now they want to ban Whatsapp cos it's encoded. Go figure. https://t.co/kfDIYqm9is

However, the RUSI report found that "often, smaller, internet companies are less comfortable with co-operating with law-enforcement agencies. Some are keen to ensure the online anonymity of their customers, and therefore do not retain data that could be passed to law enforcement; others are keen to first notify the customer that a law-enforcement agency has requested their data."

So apparently Cameron is trying to ban whatsapp in the UK because he can't trace conversations on there ���� pic.twitter.com/Ucz6vgAHDy

The report does not name the companies involved, but SnapChat, WhatsApp, Telegram, Kik have become increasingly popular in recent times and are known to be keen to protect user data. The UK Government has threatened to ban apps that encrypt their data, such as WhatsApp, Apple's iMessage and FaceTime.

The report was critical of the complicated and often outdated laws in the UK regulating mass surveillance. It said: "We have seen evidence that the present legal framework authorizing the interception of communications is unclear, has not kept pace with developments in communications technology, and does not serve either the government or members of the public satisfactorily."

The report recommends that GCHQ and the police should only be able to gain access to peoples’ emails and internet activity after submitting a warrant request to the Home Secretary, which can then be reviewed by a senior judge.