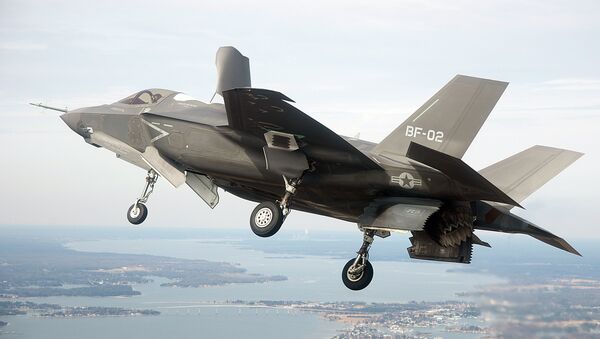 The world’s most advanced and expensive multi-role fighter program could come short of the US Department of Defense (DOD) and Pentagon hopes, as years of weak development saw cost overruns and perpetual delays.

F-35 Lightning II: the World's Most Expensive Mistake
Problems with design and computer systems made the F-35 Joint Strike Fighter program even more frustrating; for thirteen years Pentagon has defended its position on the F-35, but it looks like now could be the right time to shift priorities.

Let's look the truth in the eye:  the overall cost of developing and purchasing the jets amounts to $400 billion while operating and maintenance costs are skyrocketing upwards of $1.5 trillion. And why have we not seen any positive outcomes yet?

For the cost of the U.S. Military Complex's F-35 Air-Not-Superiority fighter, we could've established a 24 astronaut capable lunar base.

Moreover,the most expensive weapon in history lost to a 1970s-designed F-16 during a mock aerial dogfight last January.

Russia
Russia’s T-50 Fifth Generation Jet Fighter on Par With US F-35 – US Media
The Pentagon claimed that they would need exactly 2,443 combat F-35s, plus 14 development aircraft, to restrain and battle with potential military rivals like China. The question asks itself: the US, country with alternate number enemies from without, which sees threats lurking in almost from every corner, shouldn't it reconsider the role F-35 plays in its defense?

Marine Corps commandant General Joseph F. Dunford, the next chairman of the Joint Chiefs of Staff nominee, told the Senate Armed Services Committee that the F-35 development and purchasing plan is under review.

"Until the analysis is complete, we need to pursue the current scheduled quantity (2,443 aircraft) buy to preclude creating an overall near-term tactical fighter shortfall," said Dunford.

"The jet fighter lacks the sensors, weapons and speed that allow a warplane to reliably detect and shoot down other planes in combat. At least not compared to modern Chinese- and Russian-made jets - the planes the F-35 is most likely to face in battle in some future war," said War is Boring report.

The United Kingdom's former defense chief, Nick Harvey, criticized the F-35 Joint Strike Fighter, saying "You could argue it was already one of the biggest white elephants in history a long time ago."

US military and intelligence officials expressed concern over Russia's PAK-FA fighter jet noting "It has greater agility with its combination of thrust vectoring, all moving tail surfaces, and excellent aerodynamic design, than does the F-35."