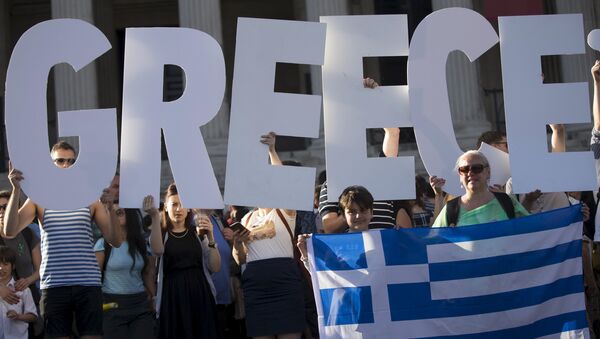 The Greek crisis is transforming into the Cold War, a Portuguese newspaper wrote.

"In recent days we witnessed an unusual series of attacks and retreats that took place between two opposing positions that fully expose the weaknesses of the European project," Jornal de Noticias said.

The hegemony of individual states, two main political clans and creditors reached its peak, which subverts democracy, the newspaper wrote.

"Whether you like Syriza and its negotiations' strategy or not, the fact is that it represents the legitimate government of Greece, the mandate of which has been entrusted by voters."

Greek negotiators have repeatedly said that they cannot cross certain "red lines". Nevertheless, they made concessions until they finally faced the last proposal of the creditors and decided to let Greek people themselves express their opinion via a referendum, the newspaper wrote.

Greece Poised for 'Indescribable' Future Outside Eurozone
Despite the fact that the timing is not the most favorable, but it is a legitimate right of Syriza, especially taking into account that the majority of Greeks prefer to stay within the Eurozone and maintain membership in the European Union, according to surveys.

Regarding Athens' request to extend the assistance program for another month, the Eurogroup said "no."

"Being under control of the ruling political clan, it [Europe] is not willing to allow any alternative other than the official hackneyed discourse of austerity measures dictated by the German orthodoxy."

According to the Portuguese newspaper, Spain acts cynically, which at one time was strongly opposed to the austerity program, but now has come down on Greece with harsh criticism.

If the Greek referendum takes place on July 5, it is likely that fear would prevail and Greeks will say "yes" to more austerity measures, the newspaper predicts.

"The brackets around Syriza will close and in its place a new, more obedient government will come that will receive access to a more friendly [bailout] program, which will certainly include a partial writing off of the debt. Let's see. Meanwhile, the European project continues to stagnate," Jornal de Noticias concluded.