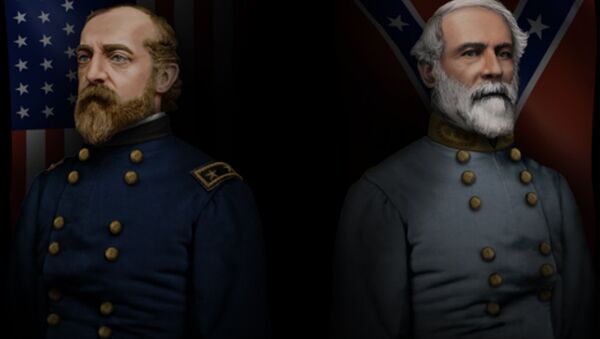 © Ultimate General: Gettysburg (Screen cap)
Subscribe
As the push to remove the Confederate flag from US public institutions gains momentum, it's moved into the private sphere, with some major retailers refusing to sell it. But Apple's choice to remove historical civil war games featuring the symbol from its App store is drawing criticism as an example of poorly-thought-out overkill.

Apple CEO Tim Cook has been known to take public stances on social and political issues. And on Sunday he tweeted out his opinion about the furor over the Confederate flag in the wake of the racist massacre of nine black churchgoers in South Carolina.

As retailers like Amazon, WalMart and eBay announced they would stop selling Confederate flags, some thought Apple should do its part as well, especially considering Cook's publicly proclaimed stance.

"I believe it’s time for Tim Cook’s Apple to join the campaign by removing digital goods that display the Confederate flag on the App Store," wrote Zac Hall at 9to5mac.com, for example, after Cook tweeted out his opinion.

Hall then referenced a screenshot of the App store results when searching for the word 'confederate' — several of which use the Confederate flag in their thumbnail image — and called for Cook to walk the walk.

"Still, a quick search on the App Store for 'Confederate' reveals iconography and artwork that displays exactly the symbol that Tim Cook spoke against on Sunday. One app, a game called Redneck Shooting Range, displays the flag behind a rifle scope. Another app, Southern Pride Themes, promotes the Confederate flag as an iPhone wallpaper."

Hall was clear that he didn't "believe Apple should censor historical content or remove informational material," but some believe Apple is failing to even bother to make that distinction.

"We have removed apps from the App Store that use the Confederate flag in offensive or mean-spirited ways, which is in violation of our guidelines," Apple said in a statement. "We are not removing apps that display the Confederate flag for educational or historical uses."

While anything called "Redneck Shooting Range" may raise questions as to educational value, other Civil War simulation games have been removed whose designers disagree that their use of the flag was anything other than for historical reference.

Maxim Zasov of Game Labs, the developers of Ultimate General: Gettysburg, one of the targeted games, said in a statement that while he respected Apple's decision, the company did not feel comfortable excising the image from what they felt was a historically accurate representation of a battle.

"Spielberg's 'Schindler's List' did not try to amend his movie to look more comfortable. The historical 'Gettysburg' movie (1993) is still on iTunes. We believe that all historical art forms: books, movies, or games such as ours, help to learn and understand history, depicting events as they were. True stories are more important to us than money."

Apple has come under fire in the past for using heavy-handed tactics to remove "objectionable" content — including banning games that feature nudity or political statements. The App store also rejected a game called Tank Battle: 1942 for depicting Russians and Germans as enemies, though they later reversed the decision.

Since the debate over the flag flared up, some commentators dispute the historical accuracy of using the flag to represent the Confederacy at all. They point out that the current X-shaped design — the "rebel flag" — was actually just "one battle flag among many", while the Confederacy had several different flags — including the "Stars and Bars" which is an entirely different design from the one currently under discussion.

000000
Popular comments
It's a darn flag for crying out loud. If a flag has that much power then why is the flag waving U.S. of A in such terrible shape? Home of the brave and land of the free anybody? At least the Confederate flag means something to people. Daisy Duke anybody?