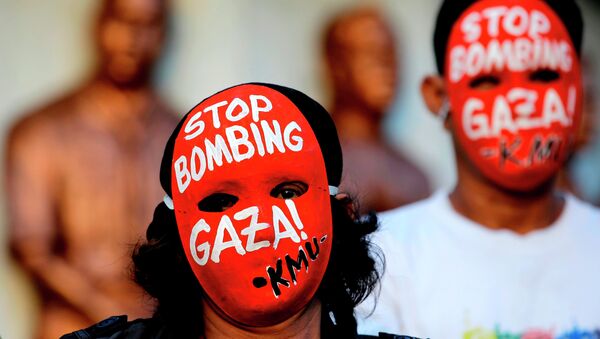 © AP Photo
Subscribe
International
India
Africa
A UN inquiry into last year's conflict in Gaza, which resulted in the deaths of more than 2,200 Palestinians, has found that there is substantial evidence to suggest possible war crimes were committed by both Israeli and Palestinian armed groups.

The United Nations Independent Commission of Inquiry investigated the campaigns undertaken by groups on both sides of the conflict, and was heavily critical of Israel's actions.

The report urged Israel to "break with its lamentable track record in holding wrongdoers accountable," while arguing that the country's political and military leadership should share some responsibility for Israel's suspected violations, as they should have known that their failure to change tactics would have resulted in huge civilian casualties.

"Those responsible for suspected violations of international law at all levels of the political and military establishments must be brought to justice," it says.

Of the 2,200 Palestinian deaths from the 50-day war, 1,462 were civilians, with a third of those children. While 67 Israeli armed officers were killed, along with six civilians.

Breaches on Both Sides

The report accuses both Hamas and the Israeli military of breaching international law in the manner in which they fought; with the commission saying it gathered "substantial information pointing to serious violations of international humanitarian law and international human rights law" on both sides of the conflict.

Israel is accused of breaching international law over its bombing of residential homes and the excessive use of artillery in civilian areas, with the report calling on Israel to provide further details of its "targeting decisions."

The commission also criticized Israel's claims that it had done its duty by warning civilians of impending attacks on residential areas in advance, saying that many of the warnings were ineffective, as civilians were often trapped and had nowhere to flee to.

"The commission recognizes that the general warnings issued by the Israel Defense Forces saved lives. At the same time, these warnings were often used in a context where people fleeing were unable to identify a safe place to go, owing to the unpredictability of many attacks over a lengthy period of time."

Many Palestinians were killed in residential areas, with the report failing to find justification for the bombing of these zones — in six cases, adding that the Israeli Defense Forces "may not have done everything feasible to avoid or limit civilian casualties."

Report of UN Commission on #Gaza war last summer — Will anyone be held accountable? none were over the last 3 wars http://t.co/Zpak2bMZke

"Many of the incidents took place in the evening or at dawn, when families gathered for iftar and suhhur, the Ramadan meals, or at night, when people were asleep. The timing of the attacks increased the likelihood that many people, often entire families, would be at home. Attacking residential buildings rendered women particularly vulnerable to death and injury.

"In six of the cases examined by the commission, and in most cases reported on by non-governmental organizations, there is little or no information available to explain why residential buildings, which are prima facie civilian objects immune from attack, were considered to be legitimate military objectives."

Palestinian militia groups were also criticized by the commissioners, with rocket attacks from groups such as Hamas seen as a trigger for the violence.

"The use of rockets in the possession of Palestinian armed groups, indiscriminate in nature, and any targeted mortar attack against civilians constitute violations of international humanitarian law, in particular of the fundamental principle of distinction, which may amount to a war crime."

While the findings of the report have seemingly justified the reports of other NGOs and eyewitnesses on location in Gaza, Israel has denounced the findings, with a Foreign Ministry spokesperson arguing that it didn't take into account the complexities of the conflict.

"It is well known that the entire process that led to the production of this report was politically motivated and morally flawed from the outset.

"It is regrettable that the report fails to recognize the profound difference between Israel's moral behavior during Operation Protective Edge and the terror organizations it confronted," the spokesperson said.

Hamas also attacked the report, with senior official Ghazi Hamad telling The Associated Press that the UN commission's findings created an uneven balance "between the victims and the killers," adding that Hamas rockets and mortars were aimed at strategic Israeli military sites, not civilian areas.