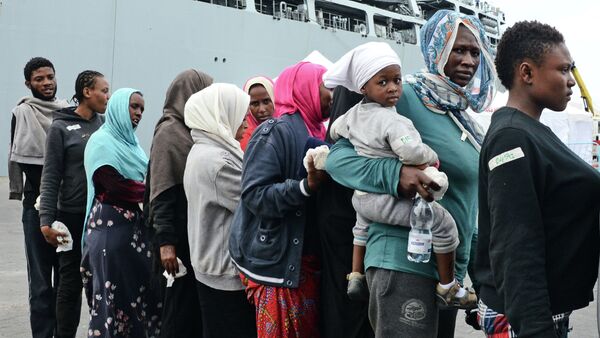 © AFP 2021 / GIOVANNI ISOLINO
Subscribe
In a poll of Slovak citizens, more than two thirds said they disagreed with taking the quota of Middle Eastern and African refugees proposed to them by the EU.

Hungary to Fence Off Border With Serbia to Stop Migrants – Foreign Minister
The European Union's plans to resettle migrants across Europe have met with opposition in Slovakia, where 70.1 percent of respondents in a telephone poll said they disagreed with the proposals contained in the EU quota plan.

The respondents were also asked if they believed the migrants posed a threat to Slovakia and its citizens. A majority, 63.4 percent, said yes, compared to 24.4 percent who replied that they don't consider the migrants to be a risk.

In May the Prime Ministers of Slovakia and the Czech Republic announced that they were against any imposition of quotas for the number migrants to be accepted by EU countries, after a meeting of the two governments in Valtice in the Czech Republic on May 12.

"I refuse to accept any quota policy, in principle," said Slovak Prime Minister Robert Fico. "Political conclusions from the European Council are in place, which have an unambiguous voluntary element."

Mediterranean Migrant Crisis - 'A Punch in the Face to Europe'
Last month the European Commission published its first proposals to better manage migration in the wake of the Mediterranean migrant ship disaster in April, in which more than 800 people died.

It plans to relocate 24,000 migrants who arrive in Italy and 16,000 who arrive in Greece from Syria and Eritrea after 15 April 2015, over the next two years, a measure which could be expanded to include an influx of migrants to other countries such as Malta. In addition, the Commission plans to ask EU member states to settle 20,000 mainly Syrian migrants, who currently live in refugee camps outside the EU, in Turkey, Jordan and Lebanon.

On June 10 the UN announced the number of migrants and refugees crossing the Mediterranean into Europe in 2015 had reached 103,000, with the vast majority landing in Italy and Greece: 54,000 and 48,000 respectively. More than 1,800 people have died making the crossing to Europe so far this year.

000000
Popular comments
Why not send them to ISRAEL??? They are taking an active part in all this - its probably their own plan - so why are NONE of the refugees being sent there? The rest of the world should demand it.
tanksbb
19 June 2015, 22:32 GMT
000000
Newsfeed
0
New firstOld first
loader
LIVE
Заголовок открываемого материала
Access to the chat has been blocked for violating the rules . You will be able to participate again through:∞. If you do not agree with the blocking, please use the feedback form
The discussion is closed. You can participate in the discussion within 24 hours after the publication of the article.
To participate in the discussion
log in or register
loader
Chats
Заголовок открываемого материала
Worldwide
InternationalEnglishEnglishMundoEspañolSpanish
Europe
DeutschlandDeutschGermanFranceFrançaisFrenchΕλλάδαΕλληνικάGreekItaliaItalianoItalianČeská republikaČeštinaCzechPolskaPolskiPolishСрбиjаСрпскиSerbianLatvijaLatviešuLatvianLietuvaLietuviųLithuanianMoldovaMoldoveneascăMoldavianБеларусьБеларускiBelarusian
Transcaucasia
ԱրմենիաՀայերենArmenianАҧсныАҧсышәалаAbkhazХуссар ИрыстонИронауОssetianსაქართველოქართულიGeorgianAzərbaycanАzərbaycancaAzerbaijani
Middle East
Sputnik عربيArabicArabicTürkiyeTürkçeTurkishSputnik ایرانPersianPersianSputnik افغانستانDariDari
Central Asia
ҚазақстанҚазақ тіліKazakhКыргызстанКыргызчаKyrgyzOʻzbekistonЎзбекчаUzbekТоҷикистонТоҷикӣTajik
East & Southeast Asia
Việt NamTiếng ViệtVietnamese日本日本語Japanese俄罗斯卫星通讯社中文（简体）Chinese (simplified)俄罗斯卫星通讯社中文（繁体）Chinese (traditional)
South America
BrasilPortuguêsPortuguese
NewsfeedBreaking
03:15 GMTUnited Russia Party Wins State Duma Elections With 49.82% of Votes
02:55 GMT911 Call Reveals Boyfriend Was Seen 'Slapping' Petito Two Weeks Before Her Disappearance - Report
02:31 GMTBiden Reaffirms Strong US-UN Partnership at Meeting With Guterres
02:22 GMTIndia Cuts Off Communications, Internet in Kashmir Due to Terrorists, Reports Say
02:12 GMTMember of CIA Chief’s Team Affected by ‘Havana Syndrome’ During Work Trip to India, Report Says
01:22 GMTClimate Change-Driven Cyclones Could be Regular Sights in Europe in 30-50 Years, Meteorologist Warns
01:02 GMT‘License to Murder Children?’ Psaki Panned for Bringing Up Biden’s Losses in Kabul Strike Answer
00:38 GMTMilley Told Admiral to Halt Operations in Pacific That China Could Deem 'Provocative', Authors Claim
00:11 GMTPremier League Goals of the Weekend
YesterdayMali Looks for ‘Plan B’ to ‘Bolster Our National Defense’ As French Mission Exits, Leaving Chaos
YesterdayGlobal Pandemic Caused Significant Surge in Demand For Black Bridal Dressers, Fashion Experts Say
YesterdayCoronavirus Death Toll Surpasses 1918 Influenza to Become Deadliest Pandemic in US History
YesterdayIran's New Defense Minister Says Enemies Will Get 'Crushing Response' - Report
YesterdayBorrell Expresses Regrets That EU Countries Were Not Invited to Join AUKUS
Yesterday‘Go Back to Mexico’: Shocking Video of US Border Patrol on Horseback Seen Whipping Haitian Refugees
YesterdayCDC Recommends Admitting Afghan Refugees 21 Days After Measles Vaccine, Reports Say
Yesterday26 GOP Governors Demand Meeting With Biden Amid Deepening Frustration Over Border Crisis
YesterdayDiscovery of Bats With Close Sars-CoV-2 Relative Add More Evidence to Natural Origins of COVID-19
YesterdayFull Harvest Moon Lights Up Sky Over Buenos Aires
Yesterday‘I Got Chills’: Travel Blogger Finds Video of Gaby Petito’s Van