Mediterranean Migrant Crisis - 'A Punch in the Face to Europe' 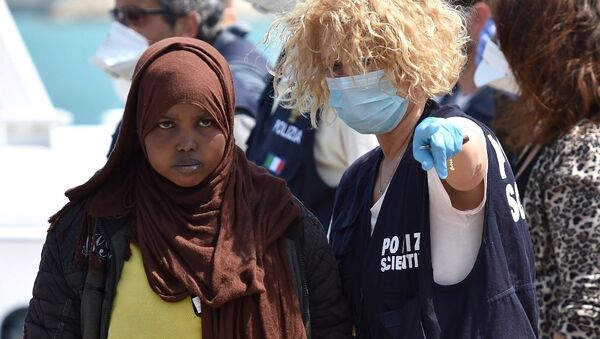 © AP Photo
Subscribe
International
India
Africa
Italian police have been forcibly removing migrants from the French-Italian border, after they have been denied entry access by the French authorities. The violence that ensued afterwards at the border town of Ventimiglia, according to Italian interior minister Angelino Alfano, is "a punch in the face to Europe."

Sealing EU Borders From Refugees Enables People Smugglers - UN Rapporteur
It follows a decision by the French interior ministry to ramp up and reinforce border control to stop any illegal immigrants or asylum seekers from entering the country.

Italy, which has borne the brunt of rescuing and processing refugees and migrants, is demanding other European Union member states do more to help.

So far this year, 54,000 migrants have arrived by boat on Italian shores, according to figures from the United Nations Human Rights Council; 48,000 traveled to Greece, 920 to Spain and 91 to Malta.

And with Italy bearing the brunt, reports in Italian newspaper Corriere della Sera say that Prime Minister Matteo Renzi intends to send migrants to other countries without their consent, if EU states do not take in their fair share of asylum seekers.

EU's most contentious anti- #immigration posters, including this week's from #Hungary —> http://t.co/ijDSNC2ugv pic.twitter.com/V8BPfH0sn8

Renzi’s so called 'plan B' is to grant temporary residence permits to rescued migrants, which would allow them the right to travel freely within the EU. Plan B, according to Renzi would be a "wound" for Europe, saying that the European Community must take responsibility for the 2011 military intervention in Libya that turned it into a lawless state.

But French Interior Minister Bernard Cazeneuve says Italy must abide by European asylum rules. Under the ‘Dublin Regulation’ the first EU member state a migrant enters must process their asylum requests. However, Italy says the Dublin rules no longer apply given the sheer scale of the crisis.

A child is embraced by his mother in front of the #migration center next #Tiburtina station #Rome,June 12,#Italy pic.twitter.com/HtAM2iQ86Y

Meanwhile Tasia Christodoulopoulou, Greece’s Alternate Minister for immigration, has accused Europe of acting with "criminal indifference" to the migrant crisis.

"It’s going to get worse, really worse and Europe isn’t batting an eyelid. It’s watching this unfold with criminal indifference."

EU interior ministers are meeting in Luxembourg on Tuesday to discuss the mass migration crisis in the Mediterranean.

According to Matthew Gibney, Professor of politics and forced migration at Oxford University, "the best Europe can do, is where possible, to search for fair and peaceful solutions to conflicts; provide development assistance where appropriate and access to legal temporary and medium term economic migration; and provide asylum to those who need protection because of threats to their human rights".

"The provision of asylum should be conceptualized as a shared responsibility of European states with responsibility for refugees shared equally between them."

European Commission President Jean-Claude Junker has recently proposed a quota system for EU countries to share the burden of asylum seekers. Britain’s Home Office says it will refuse to accept any refugees under the program along with Spain, Hungary, Poland, the Czech Republic, Estonia, Latvia, Lithuania and Slovakia.