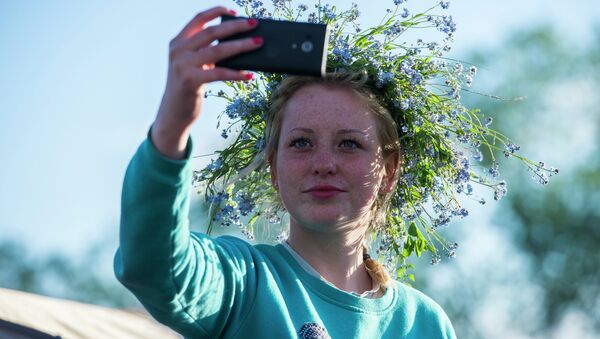 A Russian NGO wants selfie lessons for at-risk teens and fines for bloggers who take dangerous selfies while government officials disagree with the proposal.

The head of Saint Petersburg-based NGO "For Safety" has sent a note to Russia's Ministry of Education, requesting "selfie lessons" in schools for at-risk teens.

"We created this initiative after recent tragic news about deaths of children from selfies. Children see bloggers and roofers and try to copy them but end up being killed," Kurdesov told Sputnik.

On Thursday, two Russian fishermen were hospitalized for snake bites after taking a selfie with a viper they thought to be a non-venomous water snake. On June 1, a teen in Russia's Tula region was electrocuted to death after attempting to take a selfie on a power line. In June, a Moscow woman gained international attention after shooting herself in the head while taking a selfie with a pistol at work.

"The first tip is to care about safety, and don't try to copy bloggers and roofers. Second, I believe that dangerous selfies should be banned and the roofers who take them should be fined," Kurdesov told Sputnik.

Kurdesov's NGO would provide a curriculum with guest lecturers including psychological therapists, safety experts and professional photographers. Kurdesov is also the owner of the Bors private security company, whose safety experts provided lessons as part of the NGO's "Safety School for Children" project, according to the NGO's website. The NGO and the private security firm are run out of the same building.

Minnesota Newspaper Hurls Obscenity at Obama Over Selfie-Stick Video
"It is necessary to convince children from an early age that such an easy pathway to success is dangerous," Kurdesov told Izvestia.

In the safe selfie lessons, professional photographers would give tips on making good selfies in interesting places without putting anyone in danger, Kurdesov told Sputnik.

Russia's Ministry of Education responded to Izvestia, saying that Russian schools' existing "Foundations of Everyday Safety" program already include lessons on personal and online safety. The ministry's press service added that instead of being "safe selfie" techniques, children should be taught to stay safe weuen interacting with various objects and animals.

Selfie Psychopath? Study Links Online Behavior and Mental Disorders
"If a person makes themselves the most important thing in the world, wants to only admire themselves and for others to admire them, it speaks of a person's mental poverty, of mental issues," Vyalba said on Tuesday.

Russia's Ministry of Health countered the claims, saying that it does not consider the desire to take selfies a mental illness because people do not develop an addiction, in the psychiatric sense of the word, from photographing themselves.

"It has a level of narcissism natural to people to varying extents," the ministry's press-secretary told RIA Novosti, citing Snow White and the Seven Dwarfs line "Mirror, mirror on the wall, who's the fairest of them all?"