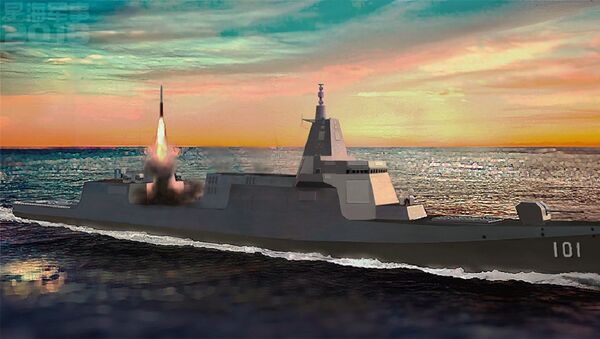 CC BY-SA 3.0 / 星海军事 / Type 055 destroyer
Subscribe
New satellite data reveals that China is getting ready to test Asia’s largest surface warship. It will be tested at a landlocked test rig in Wuhan, the capital of Hubei province in China.

The warship Type 055 cruiser mockup is nearing completion with recent photos showing that the warship’s sophisticated electronics and assimilated stealth mast are finished and ready to be tested at the test rig in Wuhan, Hubei province, China.

The purpose of building such a mockup is to test electronic interaction/interference between the Type 055's multiple radars, communications and other electronic equipment in the real world.

Any required modifications to the electronics can be easily changed on the mockup as well as site support from the laboratories will be provided during the testing.

The first photos of the test rig were made available on Chinese internet in April of last year. In January 2015 the images showed the rig nearing completion.

Regarding the mission of the warship, the authors noted that the Type 055 cruiser will command Chinese taskforces; act as the center of fleet air defenses against enemy air attacks, accompany carrier groups and launch barrages of land attack and anti-ship missiles to project Chinese airpower.