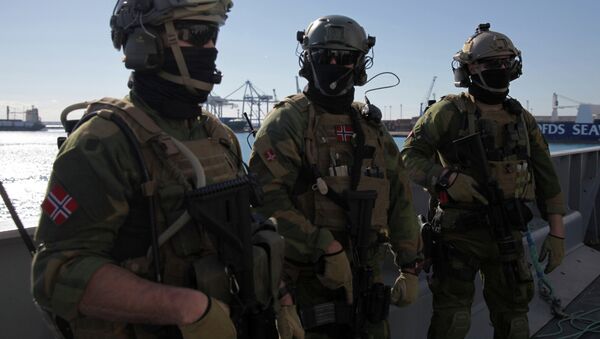 © AFP 2023 / YIANNIS KOURTOLGOU
Subscribe
International
India
Africa
Russophobia is flourishing in Western countries; it is an inherent feature of their policies, serving as a pretext to justify increased military spending to counter an imaginary Russian threat, a daily Norwegian newspaper said, stressing that Moscow poses no danger to the West.

This spring Norway marked the day when Nazi Germany invaded the country, the day the country was liberated and Constitution Day.

Those who fear Russia and demand an increase in the military budget are part of the academic and political elites who supported the US invasion of Iraq and Afghanistan, the media outlet reported. As a result of US and NATO engagement in the Middle East, several countries, including Iraq and Afghanistan, as well as Libya, Syria and Yemen, were ruined.

Norway, NATO's founding member, was also involved in this process, meaning "the Norwegian Armed Forces used billions [of krones] to fuel fire of war across vast swathes of the Middle East," Dagsavisen said.

"Only dishonest experts in international law can claim that the United States and NATO carry out military operations in accordance with the international legal rules," the newspaper emphasized.

Crying Wolf: Western Hawks Invent Myths of Russia's Baltic Advance
Recent history proves that Norway does not "need more weapons until we reach a consensus on where we will aim the guns," the newspaper said.

Although Russia poses no threat to any Western country, including Norway, Russophobia is inherent in Western politics. It dates back to the times of King Oscar I who ruled Sweden and Norway in the 19th century according to the newspaper. He wanted Sweden and Norway to take part in the Crimean War alongside the United Kingdom and France.

"Anti-Russian propaganda was extremely active in both countries. It sunk into the hearts of some Norwegians and is still there. This is sad and dangerous," Dagsavisen noted.