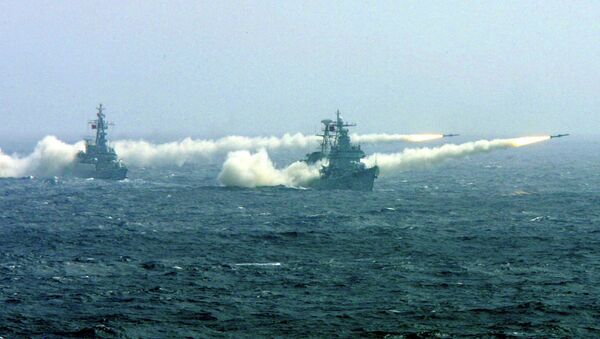 © AP Photo / Zha Chunming
Subscribe
Chinese maneuvers have united countries in the Asia-Pacific and increased the need for US engagement in the region, US Defense Secretary Ashton Carter said Wednesday in a speech at the Pearl Harbor military base in Hawaii.

WASHINGTON (Sputnik) — The United States will remain the principal security power in the Asia-Pacific for decades to come, Carter declared.

“China's actions are bringing countries in the region together in new ways.”

Chinese aggression in the South China Sea, he added, was “out of step” with international norms and the regional consensus in favor of a non-coercive approach to settling claimant disputes.

“They're increasing demand for American engagement in the Asia-Pacific, and we're going to meet it.”

He warned China not to militarize the South China Sea by building bases on disputed island territories that China has claimed are within its territorial rights.

Carter underlined that the United States would use its right to operate in the Asia-Pacific regardless of China’s actions.

“[T]he United States will fly, sail, and operate wherever international law allows, as we do all around the world.”

On May 22, 2015, the US State Department rejected Beijing's demands that US surveillance planes stop flying over disputed territory in the South China Sea.

Over the past few months, China has been constructing artificial islands on coral reefs in the Spratly Islands region it claims in the South China Sea. The US State Department has expressed concern over Beijing's claims to 90 percent of region.

China's territorial claims have been disputed by Malaysia, Vietnam, Taiwan, Brunei and the Philippines. Similar delimitation issues have marred China's relations with Japan and South Korea.