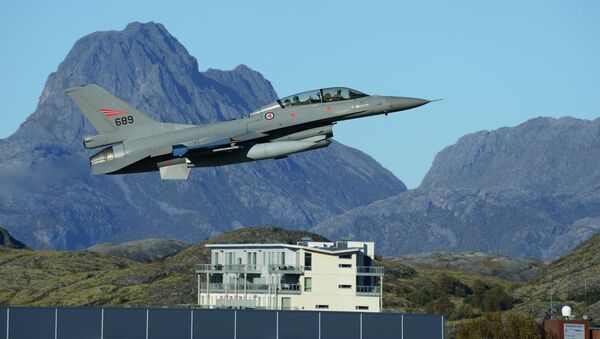 © Flickr / US Department of Defense Current Photos
Subscribe
The Arctic Challenge Exercise 2015 is kicking off in Scandinavia.

MOSCOW (Sputnik) – The Arctic Challenge Exercise (ACE) 2015 is kicking off in Scandinavia, with Norway being the leading nation of the fighter jet drills.

"The aim is to exercise and train units in the orchestration and conduct of complex air operations, in close relations to NATO partners. The unique cross border air space makes ACE 2015 a one of a kind training ground for increasing interoperability and skills in all parts of the chain," exercise director Brig. Gen. Jan Ove Rygg said, as quoted by the official website of Norwegian Armed Forces.

Norway Starts NATO 'Dynamic Mongoose' Sub-Hunt Exercise
This is the second time that the Arctic Challenge Exercise is carried out. The first such drills were held in 2013.

"The plan forward is to continue every other year. Even though Norway, Sweden and Finland are the host nations, all of the participating countries contribute to the planning, which helps build our national and allied capability to lead air operations," Rygg explained.

ACE 2015 involves some 100 aircraft from the three Nordic host countries, as well as the United Sates, the United Kingdom, Germany, France, Switzerland and the Netherlands. The exercise is taking place between May 25 and June 5.

Finland, Sweden and Switzerland are the only non-NATO states taking part in the drills.

NATO has been strengthening its military presence along Russian borders since Crimea reunited with Russia and the conflict in southeastern Ukraine escalated. The bloc accuses Moscow of being involved in the fighting between Kiev forces and independence supporters in the Donetsk and Lugansk regions, something that Russia has repeatedly denied.

Norway’s Top Spy Catcher Wary of Russian ‘Moles’
In April, the defense ministers of Norway, Sweden, Denmark and Finland, along with the foreign minister of Iceland, published a joint op-ed in the Norwegian Aftenposten newspaper, asserting the need to expand northern military cooperation amid "Russian aggression."

Russia has expressed concerns over NATO's military buildup along its borders. According to Russian Foreign Minister Sergei Lavrov, the "Cold War mindset" still prevails in the bloc, which ceased what it refers to as "practical cooperation" with Russia in April 2014, when the armed confrontation in Ukraine's southeast began.