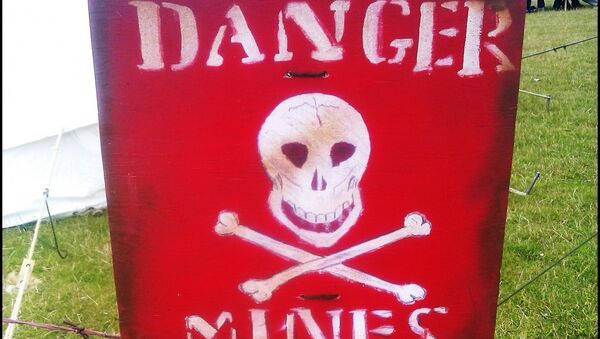 © Flickr / Stuart Chalmers
Subscribe
Sweden is putting troops back on the strategic Baltic Sea island of Gotland, and a local politician wants to mine the island’s harbors to fend off an imaginary attack from Russia.

Defense Minister Peter Hultqvist, said he would place a company of about 150 soldiers on Gotland, which lies almost midway between mainland Sweden and Latvia in the middle of the Baltic Sea. Sweden will also step up military exercises around the island involving the army, navy and air force.

Red Scare 2.0: Sweden Says Third of Russian Diplomats Are Spies
As if that were not enough, on Tuesday the local TV4 Nyheterna cited People’s Party activist, Ulf Classon, who wants to carve special openings under the island’s three harbors that could be mined in the event of a possible military invasion, naturally enough from Russia.

“Gotland is a major strategic base on the Baltic. We want to slow down a possible invasion to win time before we get help from the mainland”, Classon said.

Karlis Neretnieks, the onetime rector of the Defense Institute, readily echoed Classon’s alarmist sentiment saying that at least 1,500 troops, 20-30 tanks, 50 armored vehicles, a small artillery battalion and an air-defense battery would be needed to foil the enemy’s attempt to demine the caves.

A theoretical capture of the island could pose a ”serious threat to the Baltic nations NATO might prove too late to help out”, Karlis Neretnieks warned.

All this is part of the anti-Russian paranoia that has swept Sweden the past few months, with reported sightings of Russian subs allegedly lurking around Swedish waters and Moscow allegedly stepping up its political, economic and military espionage in the country…

In the most recent example of all this political whodunit, members of the Swedish Peace and Arbitration Society (SPAS) decided to use 'gay propaganda' to shoo away imaginary Russian subs.

They installed a subsurface sonar system called "The Singing Sailor," which sends out Morse code to any visitors nearby with the message:

Activists send gyrating, #SingingGaySailor into waters off Sweden with a message of peace: http://t.co/oZvp2znbAo pic.twitter.com/FDbHOwlMbV

'Gay Propaganda' to Defend Sweden From Russian Submarines – Peace Activists
The sonar system has an animated neon sign of a dancing sailor in his underwear. According to Swedish activists, the new "defense method" might scare off the commanders of Russian submarines swimming in Swedish waters.

Meanwhile, Stefaan De Maecker of the local Green Party said that instead of going around mining the island, the local politicians should better bother about the much-needed reconstruction of the Slite harbor so that it could serve as a backup to the seaport at Visby.

No enemy submarines have so far been sighted off Gotland, but the tourists, regularly ferried in from the mainland, will soon have a chance to experience the nerve-tickling sensation of walking among mines…

000000
Popular comments
A good country for psychiatrists. Maybe that's what Sweden is worried about, a mass invasion of Russian psychiatrists. In any case, there's nothing in Sweden worth an invasion for, Ikea's, just half an hour away, the queues are painful but you won't get shot.