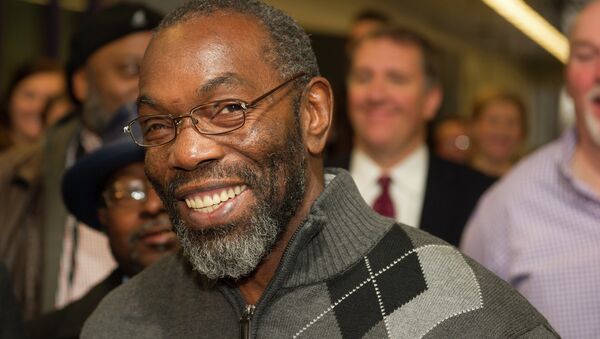 A Cleveland man imprisoned for four decades for a murder he did not commit is suing the officers who framed him when he was just 18 years old.

Ricky Jackson, 58, was just a teenager in 1975 when he was wrongly convicted for murder based on the testimony of a single eyewitness — a 12-year-old child.

Decades Denied: Ohio Men Freed From Jail For a Crime They Didn’t Commit

That witness, Eddie Vernon, now in his 50s, came forward in 2013 to recant the testimony he gave which led to the convictions of Jackson and his brothers, Wiley and Ronnie Bridgeman, for the murder of a man outside a corner store.

Vernon said that police had coerced him and threatened to put his parents in jail if he didn't say what they wanted him to.

All three brothers were initially given death sentences that were later commuted to life sentences. The 40 years Jackson has served may be the longest term of a wrongfully convicted person in US history.

The lawsuit Jackson filed Tuesday names both the city of Cleveland and eight officers who were involved in the case against him, some of whom are now dead.

The lawsuit presents Vernon's story that, though he heard the fatal shots fired while he was riding a school bus, he had not seen the shooter. When he could not identify Jackson and his brothers in a lineup, police officers yelled at him, and threatened him and his parents until he identified the suspects they indicated.

Record Number of Exonerations in the U.S. During 2014

In addition to being beaten by police officers trying to extract a confession from him, Jackson alleges in the lawsuit that he and his brothers were targeted even when another suspect was implicated by informants and his own mother. That man was later convicted for armed robbery.

According to a statement from the Chicago law firm filing the suit for Jackson, many of his close family members died while he was in prison, suffering abuse and injury at the hands of his jailers.

"This lawsuit seeks compensation for that grievous injustice," attorney Jon Loevy said in a statement. "We now know substantially more about the fallibility of eyewitness identifications. Too many people have been sent to prison wrongfully based on bogus identifications."

Jackson already won $1 million from the state of Ohio in March of this year.

A spokesman for the city of Cleveland told the Guardian they would not comment on pending litigation.