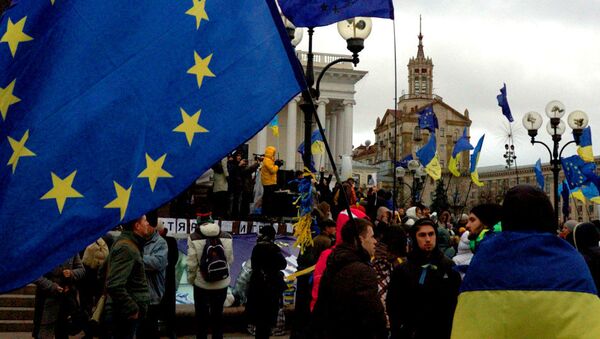 Ekaterina Blinova
All materialsWrite to the author
Ukrainian President Poroshenko has presented his plan aimed at creating "a new, democratic, European Ukraine;" however, the question remains open if Poroshenko's "Ukrainian Dream" will come true?

Despite the fact that the USSR collapsed 25 years ago, Saakashvili insisted that "the Soviet legacy" remains a stumbling block in Ukraine's way to its bright European future.

Today, Ukraine is ready to break with its past, Saakashvili claimed, adding that due to "deregulation" Ukraine will become more attractive to foreign investors.

"Licenses and permits are going to be erased and reshaped according to European standards. First steps had already been taken by the government, with the ministries of economy and justice scrapping a number of required licenses and permits," the former Georgian president elaborated.

US Can’t Keep Its Nose Out of Ukraine’s Business – Ukrainian Gas Magnate
Indeed, the "much-anticipated" reforms will give foreign enterprises the green light and let them increase foreign control over the Ukrainian economy.

"[The World Bank and IMF] intent is blatant: to open up foreign markets to Western corporations. It's telling that one of the key reforms enforced by the Bank is that the government must limit its own power by removing restrictions to competition as well as the role of state 'control' in economic activities," elaborated Frederic Mousseau, Policy Director of the Oakland Institute and a co-author of the report "The World Bank and the IMF Open up Ukraine to Western Interests."

Furthermore, the decision to lift moratorium on land sales in 2016 will allow Western agroholdings to jump at a chance to grab rich arable Ukrainian territories.

Ukrainian Parliament Passes Bill to Allow Foreigners to Serve in Military
"Debureaucratization," the other element of Poroshenko's program, means that the country will rid itself of its "excessive" public servants, replacing them with a "young, dynamic, well-paid team." Remarkably, in Autumn 2014 Poroshenko had already carried out "cleansing" of Ukraine's bureaucratic apparatus, and ousted all officials related to overthrown Ukrainian president Viktor Yanukovich.

In order to bolster the government's efficiency Petro Poroshenko invited a number of foreign officials, including Mikheil Saakashvili, to assume high posts in the country. Since then, however, the situation has not been improved: the country is still teetering on the brink of economic and political collapse.

The "deoligarchization" of Ukraine looks like a mission impossible, since the country's head, Petro Poroshenko, remains one of the most powerful and super-rich oligarchs in the country. Curiously enough, despite promises, the Ukrainian president has not sold his TV station, and preserved a number of other profitable assets.

Ukrainian Officials Turn Access to Combat Zone Into Big Business
In addition, Petro Poroshenko nominated a number of his close friends and Ukrainian tycoons, for high posts in the government. For instance, media mogul Boris Lozhkin (of UMH group) assumed the position as the head of Poroshenko's presidential administration. Other Ukrainian oligarchs like Victor Pinchuk, one of the top Clinton's Foundation donors, are still regarded as powerful decision-makers.

Some experts say that Poroshenko's crackdown against some tycoons is in fact an internal struggle between the Ukrainian oligarchical groups, with the goal of carving up of assets of their rivals.

"The emergence of Ukrainian national identity during the Maidan protests and the war should translate into a less centralized system rather than a more centralized one," Mikheil Saakashvili claimed.

However, Poroshenko's "decentralization" initiative still remains ink on paper, since the eastern Ukrainian regions have yet to gain their official "special status" and independence from Kiev. Furthermore, recognizing that Ukraine is a diverse country consisting of many different groups, Poroshenko, however, has repeatedly stressed that he strongly opposes federalization or greater local autonomy of Ukraine's regions.

Poroshenko's ambitious "Four Ds" sounds like a good plan, but it seems it bears no relation to reality on the ground.