US Extends National Emergency, Sanctions on Syria for Another Year 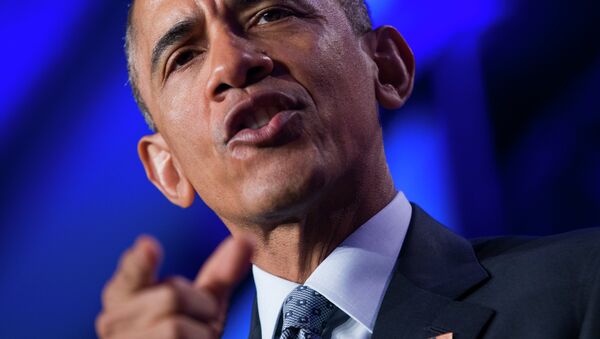 Obama said in a letter to US Congress that the United States will continue the sanctions against Syrian individuals and entities as part of the national emergency actions against Damascus.

WASHINGTON (Sputnik) — The United States will continue the sanctions against Syrian individuals and entities as part of the national emergency actions against Damascus, US President Barack Obama said in a letter to US Congress.

“I have determined that it is necessary to continue in effect the national emergency declared with respect to this [US national security] threat and to maintain in force the [anti-Syrian] sanctions to address this national emergency,” Obama said on Wednesday.

On May 11, 2004, Obama issued an Executive Order that declared a national emergency with respect to the actions of the Syrian government and imposed sanctions on individuals and entities.

Creating Safe Zones in Syria Requires Major Combat Mission - Ashton Carter
Washington intensified the sanctions after the Syrian uprising in May 2011 to pressure the regime of Syrian President Bashar al-Assad to allow for a democratic transition in the country and prevent human rights abuses, according to the US State Department.

Obama urged the Syrian government on Wednesday to stop the “violent war and allow for a political transition” that will lead to a “future of greater freedom, democracy, opportunity and justice.”

Moreover, Obama explained that the United States will look into “changes in composition, policies and actions of the Syrian government,” before considering lifting the sanctions.

The President said he extended the order to preserve the US national security, economy and foreign policy, which he found is threatened by Syria’s support for terrorism, occupation of Lebanon as well as pursuit of weapons of mass destruction and missile programs.

Obama also said extending the measure was in response to Syria’s undermining United States’ and international efforts to stabilize Iraq, according to the letter.