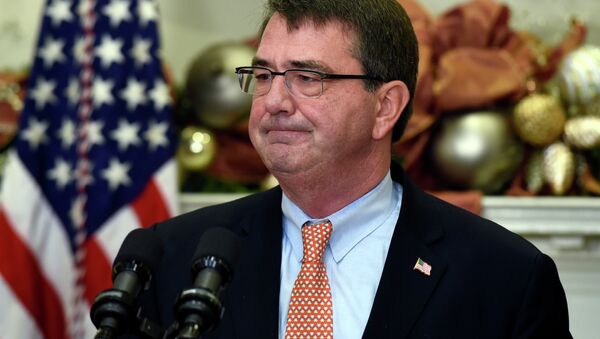 US Defense Secretary Ashton Carter said that the United States would have to launch a significant military operation in Syria to establish humanitarian safe zones that would purportedly protect civilians and refugees.

WASHINGTON (Sputnik) — The United States would have to launch a significant military operation in Syria to establish humanitarian safe zones that would purportedly protect civilians and refugees, US Defense Secretary Ashton Carter said during a Congressional hearing on Wednesday.

It was a difficult task to contemplate, Carter explained, because trying to establish territory where civilians and refugees could flee to for safety would be contested by the Islamic State (ISIL), the al-Nusra Front and the Syrian government forces.

Carter noted that countries bordering Syria, along with other partners in the region, are unlikely to provide the strong military support that will be needed to conduct a safe zone mission.

Rebels Backed by CIA Join al-Qaeda in Fight Against Assad in Syria
On May 1, 2015, Syrian Opposition Council President Khaled Khoja asked US Secretary of State John Kerry if the US military could help the rebel forces in establishing safe havens in liberated areas of Syria.

On February 19, 2015, the United States and Turkey signed an agreement to train and equip moderate Syrian rebels opposed to the ISIL militants.

Syria has been torn by civil war since 2011, with government forces loyal to Syrian President Bashar Assad fighting numerous militant groups, including the al-Nusra Front and ISIL.

A US-led international Coalition of some 60 nations began carrying out airstrikes against ISIL targets in Iraq in August 2014, and expanded the air campaign to include Syria in September 2014.