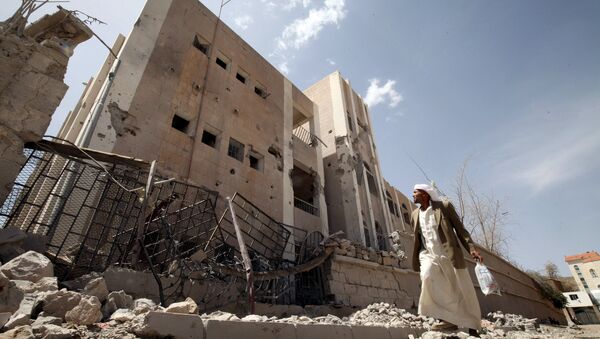 US Department of State announced that Washington will allocate more than $68 million in humanitarian aid to conflict-torn Yemen.

Saudi Airlines Cancels Flights to City Bordering Yemen Amid Mortar Fire
WASHINGTON (Sputnik) – Washington will allocate more than $68 million in humanitarian aid to conflict-torn Yemen, US Department of State announced in a statement on Wednesday.

“Today in Djibouti, Secretary Kerry announced the United States is providing more than $68 million to help humanitarian organizations meet the needs of nearly 16 million people in need of assistance in Yemen, including 300,000 newly internally displaced persons,” the statement read.

The funds will provide water, food, shelter, medical care, protection, and other assistance through the World Food Program, the UN High Commissioner for Refugees, the UN Children’s Fund and other organizations, according to the statement.

US humanitarian aid to Yemen for fiscal years of 2014 and 2015 totals more than $188 million, the Department of State said.

The humanitarian situation worsened in Yemen amid Saudi-led coalition airstrikes and battles between Houthi militants and forces loyal to Hadi. According to UN estimates, over 1,200 people have been killed, while 300,000 have fled their homes in Yemen in the past six weeks, amid ongoing ground fighting, aerial bombardments and sniper attacks on civilians.