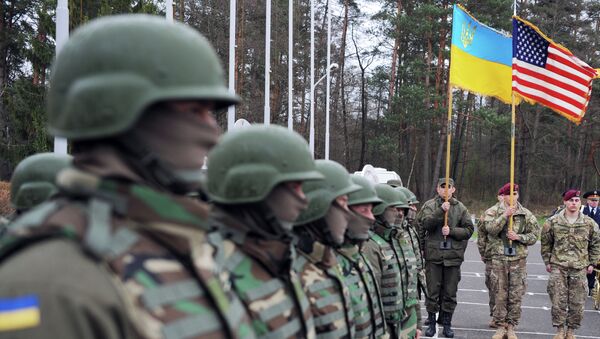 © AFP 2021 / YURIY DYACHYSHYN
Subscribe
The United States is getting ever more aggressive towards Russia. Earlier this week, the House of Representatives passed a proposal for legislation that aims to boost military buildup in Eastern Europe and provide $200 million worth of military aid to Ukraine.

The National Defense Authorization Act (NDAA) for the 2016 fiscal year includes the approval of $200 million to provide military aid, including lethal weapons, to Ukraine and to deploy the Aegis Ballistic Missile Defense system in Poland to defend Eastern Europe against alleged Russian aggression.

US Congressional Delegation to Ukraine Urges More Aid, Lethal Weapons
The NDAA is set to authorize the budget authority of the US Department of Defense. The United States passes an NDAA every year, and it is one of those rare pieces of legislation that always gets bipartisan support.

The US House of Representatives is expected to consider the NDAA for the 2016 fiscal year during the week of May 11. Earlier this week, the House Armed Services Committee passed its proposal with a bipartisan vote of 60 to 2.

Ukraine remains a high priority on Washington's agenda. The legislation calls the United States to provide military assistance to Ukraine, including the shipment of lethal weapons, valued at $200 million.

According to Section 1532 of the document, the US government will provide training and send military equipment, including lethal weapons, to the Ukrainian military through September 30, 2016. The purpose of the military assistance is to help the Ukrainian government secure its territory "from foreign aggressors."

US-Ukraine Military Drills Risk Intensifying Civil War – Former US Diplomat
The only question that remains to be answered is from what kind of foreign aggression does the United States want to protect Ukrainians?

Other Eastern European nations, such as Poland and Romania, will also receive military assistance. The House plans to modify the Aegis Ashore missile system site in Romania and deploy a brand new one in Poland to ensure the countries have anti-air warfare capabilities to defend themselves from alleged "Russian aggression".

The Middle East is another region where the United States has its eyes set. The House is ready to spend an astonishing $600 million to train and equip Syrian rebels, fighting against the officially-elected government of Bashar al-Assad.

Despite a number of acute problems on the homefront, the United States is keen to intervene in other countries' affairs. Moreover, Washington is willing to shell out billions of dollars to assist on one hand to Kiev in its fight against anti-government militia, while on the other hand, help Syrian rebels to fight against the officially elected Syrian government.